John Hanlon
|
Posted: Jan 08, 2016 10:02 AM
Share   Tweet
The opinions expressed by columnists are their own and do not necessarily represent the views of Townhall.com. 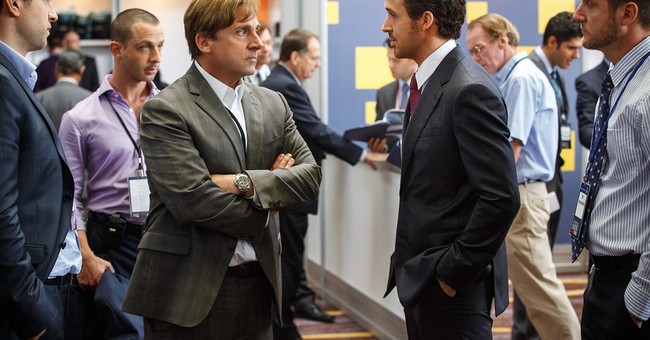 The financial crisis of 2008 is still a confounding mess to many of us. There are so many different ways to analyze the troubled economic decisions that led to that recession that it’s hard to know what the underlying truth really is. That’s what makes The Big Short — an accessible dramedy about the collapse — so gratifying.

In the past, director/screenwriter Adam McKay has often succeeded in his more absurdist comedies (Anchorman, for instance) but he’s faltered in over-the-top films as well (The Campaign, a film he helped write the story for, was a big disappointment). Here, McKay takes a real life premise and crafts into a film that is often as hilarious as it is outrageous. The film has been adapted from the bestselling book by Michael Lewis, who previously wrote the books that The Blind Side and Moneyball were both based on.

The combination of the analytic source material by Lewis and the wacky laughs that McKay often presents on the big screen may seem like an odd combination. It’s a strange mixture but one that works unmistakably well here.

The feature tells the story of an eclectic mix of investors who saw dark clouds gathering over the economy years before 2008. Christian Bale plays Michael Burry, an idiosyncratic but ingenious hedge fund manager who can’t seem to have a normal conversation. Long before the housing market begins to collapse, Burry senses a major shift coming. He realizes that the housing market is supposed to be one of the most stable markets there are but he also knows that people are deluding that market for their own financial benefit.

After some discussion about certain complicated financial matters, McKay’s comedic sensibilities kick in as he presents these topics as clearly as possible. During a conversation on subprime mortgages, for instance, Margot Robbie pops onscreen to explain the issue while soaking in a bathtub. This is McKay’s way of telling the audience that this stuff may be complicated and a little messy but it’s worth paying attention to.

Brad Pitt, Steve Carrell and Ryan Gosling all have roles as hedge fund managers or analysts who see that the housing market is being held up by shaky loans and cynical manipulations. Carrell’s character Mark Baum, a hedge fund manager, starts out the film as an angry investor. It’s easy to question his frustrations at the beginning of the film but as the plot meticulously unfolds, it’s the viewers who should be angry at what we are witnessing.

When Baum, who despite his cynicism can’t even comprehend the enormity of the housing issue, visits a strip club only to find a stripper who owns multiple houses and a condo (with few other assets to speak of), he begins to see how major this crisis has become.

In one devastating scene, two obnoxious real estate agents talk about how they’ve tricked people into buying houses they can’t afford, and Baum is shocked. “They’re not confessing. They’re bragging,” one of Baum’s associates notes to Baum’s incredulity.

When the crisis begins to take shape and the investors and hedge fund managers profit off of their insight, Brad Pitt’s character Ben Rickert is quick to admonish them. “You just bet against the American economy,” he says. The crisis may have financially benefited a few individuals but the economy suffered because of undeniable systemic issues at the core of the housing market. To his credit, McKay never shies away from the stunning realization that the collapse — which some people profited from — cost millions of people their jobs and their homes.

It’s hard to believe that these issues have been truly fixed but McKay has surely done his part in showing to the amusement and shock of his audience how bad the situation became and how the 2008 economic collapse might’ve been prevented.