John Hanlon
|
Posted: Jan 07, 2016 12:01 AM
Share   Tweet
The opinions expressed by columnists are their own and do not necessarily represent the views of Townhall.com. 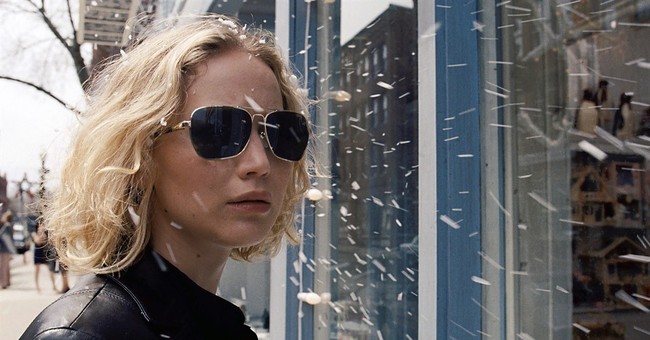 When I recently entered a theater for a midday showing of the new drama Joy, I knew that the film was the story of a young female pioneer who helped invent the Magic Mop. What I didn’t realize is that the story is about much, much more than one success story. This is a film about the American dream and about what it takes to succeed in an industry that would rather look down on inventive young people who want a seat at the table.

During its opening moments, director David O. Russell (Silver Linings Playbook) notes that the film is “inspired by true stories of powerful women and one in particular.” He then sends us straight into the world of the title character Joy (Jennifer Lawrence), who — without realizing it — is the one person who can hold her dysfunctional family together.

Like in his earlier films, Russell quickly establishes a distinctive and original world for his characters. The strong-willed and creative Joy is isolated in a world of strange and quirky family members who depend on her. Joy has two young children with an ex-husband (Edgar Ramirez), who lives in her family’s basement. She has a mother (Virginia Madsen) who spends her days watching soaps (with an appropriately-cast Susan Lucci beaming on the television screen), an inappropriately rude father named Rudy (Robert De Niro) and a grandmother (Diane Ladd), who is the only one who seems to believe in Joy’s future.

Joy loves her family but she wants more and her grandmother reminds her that she deserves it.

During a trying boat ride, Joy gets an idea for a new invention: a user-friendly mop that is easy to use and clean. She follows up on that idea and starts planning to build a product of it.

This story, which was written by Russell and Annie Mumolo, shows how Joy — who is based on the real-life entrepreneurial genius Joy Mangano — found more in her life through determination, spunk and an overwhelming desire to succeed. The feature takes its time in developing the main character (and her frantic home life) before it shows how her invention became a reality. Because of that, the story feels more genuine.

One of Russell’s great choices here is to show Joy’s creative side and toughness long before she enters the business world. This is a woman who faced adversity long before her first patented invention and her ability to overcome such obstacles foreshadows why she can later so deftly manage conflict and face off against rivals who consistently underestimate her.

Played by Lawrence (who deserves Oscar consideration for another great performance), Joy is a complex but breathtaking lead character. Here is a woman who has the tenacity to deal with inane arguments between her father and her ex-husband but also the patience to take care of her needy mother. Lawrence has the ability to show the ferocity of this business woman while reminding us that Joy is a struggling mother trying to make a good life for her family.

In telling this one story though, Russell has crafted a stirring portrait of the American dream. It’s a story that highlights the importance of hard work and fortitude. When for instance, Joy’s daughter notes that her friend’s parents mock Joy for selling mops, Joy notes, “If I was a cleaning lady, so what? There’s no shame in hard work.”

Joy Mangano truly lived the American dream, despite the fact that others doubted her and questioned her along the way. Although some of the specific situations depicted in the film aren’t completely accurate (her jealous sister in the film is a fabrication), it’s undeniable that Mongana had to face countless obstacles along the way.

In the film, Joy’s father states “It was my mistake to make her think she was more than she was.” That might be a fictional line but it’s one that speaks to the honest truth that building your own success can be an arduous journey. Joy Mangano was able to overcome even her toughest critics and her remarkable journey to financial freedom is captured in this truly memorable film.