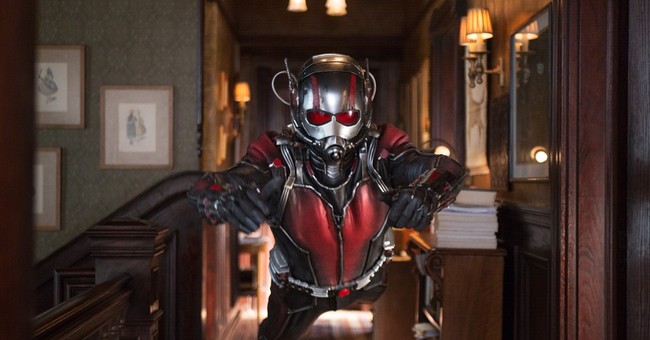 It’s an undeniable fact that today’s superhero movies are often dark and explosion-driven affairs that lack the fun and adventure that were once staples of the genre. It was only a week ago that Warner Brothers, during its presentation at Comic-Con, continued this trend by offering up a grim and moody trailer for Batman vs. Superman which, if it’s anything like its predecessor, will feature countless scenes of needless destruction, mayhem and violence. Considering this more serious trend in the genre, it’s refreshing to see the new Marvel production Ant-Man embracing its light-hearted premise.

Ant-Man features Paul Rudd as Scott Lang, a criminal who is being released from prison after three years. He’s a thief who doesn’t believe in violence but who believes in justice. He was jailed for stealing from a company that was cheating his customers and returning that money to those consumers. Despite those ill-advised decisions, his goals were admirable. After Lang’s imprisonment though, he realizes that it’s time to grow up— both for his sake and for his daughter’s.

After a few failed attempts at getting a job (his prison record keeps catching up with him), Lang’s criminal brethren convince him to steal once again, but this time his mistake helps put him on a better path.

Dr. Hank Pym (Michael Douglas), a renowned scientist whose technological company was taken away from him, convinces Lang that Darren Cross (Corey Stoll), his corporate successor, is trying to sell the ability to shrink a person’s organic tissue to a foreign military. That power would give our nation’s enemies an invaluable tool of warfare. The ability to turn a soldier into the size of an ant— which would give that soldier the ability to attack and surprise his enemies without being spotted— could ultimately lead to terrible consequences but Ant-Man isn’t about those huge stakes. Instead, it’s about one man’s journey for redemption.

Instead of amplifying the plot to make the universe’s survival at stake, director Peyton Reed makes the stakes much smaller. The film’s climax— unlike that of The Avengers or The Avengers: Age of Ultron— doesn’t feature mass casualties or a huge explosive showdown. It simply features a showdown between a fallen man who has chosen to use his powers for good and a man who has lost sight of humanity in his quest for power.

Lang is a good father who has made some terrible decisions. He wants to be good though and Rudd does a commendable job showing off the everyman quality of this unlikely hero. As his criminal accomplice Luis, Michael Pena offers a hilarious performance as a charismatic thief who ultimately changes his ways as well. When Luis helps Lang battle Cross, he notes that it feels so different to be acting as a good guy rather than acting out as a criminal. Stoll, unfortunately, is left with a thankless role here as an archetypical villain whose anger towards his mentor leads him to lose sight of reality.

Going forward, there will be plenty of superhero movies that are dark and moody affairs where the world’s survival is at stake and there’s nothing wrong with that. Christopher Nolan’s Dark Knight trilogy was a tremendous achievement. However, there should also be a place for superhero movies that are lighter, more fun and whose stakes aren’t as high as saving humanity from decimation.

Ant-Man is a fun throwback to the superhero movies we once loved and it’s a smart family-friendly tale about a man who is trying to turn his life around from his criminal past. Marvel went small with cinematic adaptation and it wins big because of it.