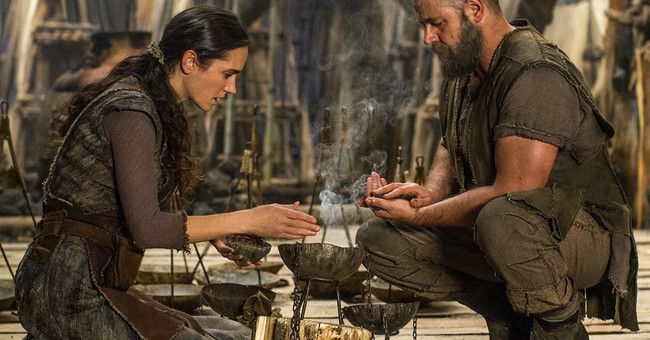 At first, director Darren Aronofsky felt like an odd choice to bring the biblical story Noah to the big screen. Aronofsky is known— in movies like Requiem for a Dream, Black Swan and yes, The Wrestler— for casting a camera on pain and the dark side of human existence. Noah is a story of goodness being preserved from the harsh world around it. But the story’s foundation is, at its core, a painfully harsh one and the depiction of that reality is Aronofsky proves that he was the perfect choice to bring this story to the screen.

“In the beginning, there was nothing” reads the text at the feature’s opening. The story then briefly offers up a few Biblical stories, bringing unknowing viewers up to the Noah epic as quickly as possible. In Noah’s world, the evil descendants of Cain (who killed his brother) are in control while Noah (played by a bearded Russell Crowe) is a simple idealistic man living a humble life with his wife (Jennifer Connelly) and children. The couple eventually adopts a young girl who mercifully survived a brutal attack of her people.

It takes a while for the feature to progress but eventually Noah is called to build the ark, where he plans to save scores of animals and his family from the devastating flood that approaches.

One of the best early scenes shows the frightened Noah standing— with a bright glow on his face— struggling with his choices in the foreground with a dark blue sky behind him. The world is on the verge of complete darkness, the director seems to be noting, but there is hope— if only a fleeting glimpse of it.

The first half of the feature arrives with a few stumbling blocks along the way. The destruction that Cain’s descendants have been responsible for is only hinted at here. For a movie about a flood wiping out an population of sinners, those sinners only appear for a few brief scenes (save for the main villain played by Ray Winstone, who receives more screen time than nearly everyone else). Also, there are talking rock formations that help build the ark but seem better suited for a sequel to The NeverEnding Story than a Biblical epic.

A surprising amount of the picture occurs on the boat, where Noah’s religious beliefs bring him to a troubling place. Noah’s adopted daughter, who is played as an adult by Emma Watson, brings sensitivity and grace to her role as Eli. Noah’s other children are unfortunately given much less opportunity to shine. Douglas Booth, who plays Noah’s naive son Shem, is given very little to do while his younger brother Ham (Logan Lerman) is given an uneven story where he falls in love with a young woman only to watch her face tragedy before the boat takes course.

Despite its overt flaws though, Aronofsky offers a tough-to-watch human drama here that tries to honestly depict some of the harsher elements of the Biblical story. He deserves credit for showing the pain that Noah’s family face as they listen to the desperate cries of those left to die on land. The portrayal of Noah himself is harsh but impactful– showing the darker side of this title character as he struggles to fulfill God’s wish as a flawed and overwhelmed man. The brutal depiction of events here may not be for everyone–and parents should clearly keep their kids home for this– but Noah is undeniably a powerful human drama that brings depth and character to the well-known Biblical story.

This review is cross-posted at johnhanlonreviews.com.