John Dempsey
|
Posted: Jul 05, 2019 12:01 AM
Share   Tweet
The opinions expressed by columnists are their own and do not necessarily represent the views of Townhall.com. 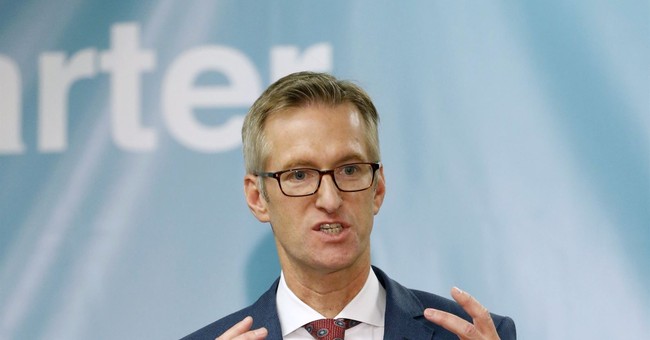 “The only thing necessary for the triumph of evil is for good men to do nothing.” – Edmund Burke

Malevolent hatred for freedom won this past weekend in Portland, Oregon.

Last Saturday The Proud Boys, an alt-right group conducted a rally in downtown Portland, along with Patriot Prayer. One of the most liberal cities on the west coast, Portland does not lack the leftist anti-freedom, anti-free speech group Antifa, and they will not tolerate any opposing opinions or beliefs.

The rally began around noon. Around 1:15 p.m., the groups started to move around and eventually ended up in a large mobile mob that turned violent. Most of the videos seen online are Antifa members physically attacking anyone who is in opposition even with a crowbar.

One striking detail in the entire event was that all of the Antifa members were wearing helmets, goggles, and other protective armor dressed up like the anarchist version of “The 300.” The black-clad group arrived to cause damage and harm to anyone who dared to stand against them.

One of the people assaulted in the melee was conservative journalist Andy Ngo. He was doused with silly string initially then the attacks against him turned violent. Ngo was severely hurt and went to the hospital. He had a CT scan and discovered that there was bleeding on his brain.

Later on, in an interview with Fox’s Tucker Carlson, Ngo stated that he was wondering where the police were when he was getting assaulted. That is a valid question, but I have a couple questions for the mayor, Democrat Ted Wheeler. Why do you allow Antifa to dress as if they are going to war at these demonstrations? So why do you have a history of having the police stand down?

Wheeler is Portland Police Bureau’s commissioner as well. A police commissioner is in charge of making policy for the police department. They are also closely tied to the politics of city law enforcement agencies. There are several reasons to believe that Wheeler is allowing politics to wreck his city.

Wheeler will not pushback against Antifa. One way is to propose and pass an ordinance banning face-covering, anything that can be a weapon and body armor; however, he does nothing.

Wheeler has a history of telling officers not to intervene. In June of 2018, the Immigration and Custom Enforcement offices in Portland were surrounded by protestors who were upset that immigration laws were being enforced.

Wheeler publicly said that he supported the ICE protests that were being performed by Occupy Democrats. The protestors menaced the civilian workers as they went to and from the office. Portland officers were told not to help ICE employees get to their vehicles. Wheeler left innocent ICE employees to face angry demonstrators, which makes me believe he did the same this past weekend.

Last October, an elderly couple was driving through downtown Portland, unaware of the Antifa mob terrorizing the area. Protestors began to surround the vehicle and cause damage, but the police never intervened. The police were told to monitor the crowd, but all they did was watch mayhem, terror, and chaos by leftists.

Wheeler likely told officers to stand down based on history. When officers are assigned to work these rallies, the command staff makes Incident Action Plans. These cover every aspect of a protest with a preplanned action, even the weather for that day. It is hard to believe that officers did not act on the assaults without reason. One question: why did the officers stand down?

Wheeler says that it is crucial to let Antifa exercise their First Amendment rights. When a group of people wears body armor and hides their identity with masks, they are not there to peaceably assemble. They are there to cause harm. He needs to stop using the First Amendment as an excuse. The phrase “peaceably assemble” is vital to note. Wheeler stands by his decision to reign in the police during anarchy.

The last few years consisted of leftists calling anyone who does not agree with them racists, homophobes, bigots, and xenophobes. Those techniques have not worked, so the next step is violence.

It is essential to understand every time Antifa attends a rally to counter-protest, they are going to war. They are anarchists that hate America and its values of limited government and free speech.

Wheeler is no different from the Antifa members that he allows to cause havoc. Ultimately, he put himself in a position of authority over Portland and the Police Bureau. The buck stops with him, and his city is an Antifa Sanctuary City now.