Thanks to Trump the Republican Leadership Has a Backbone Now

John Dempsey
|
Posted: Oct 09, 2018 12:01 AM
Share   Tweet
The opinions expressed by columnists are their own and do not necessarily represent the views of Townhall.com. 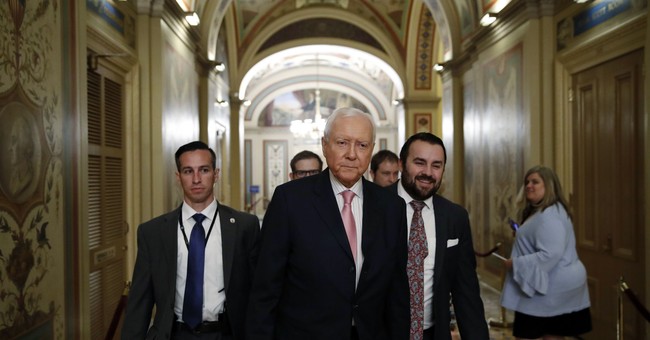 It appears that Republican leaders finally enjoy winning. The ironic part is that President Trump taught them how to win, and how to use gumption.

The last few weeks have been historic during the confirmation process of Supreme Court nominee Brett Kavanaugh. Democrats could not find a credible reason to disqualify him from becoming an associate justice of the Supreme Court. Instead of accepting their fate, ranking member of the Senate Judiciary Committee Diane Feinstein (D-CA) promoted a leaked letter accusing Kavanaugh of sexual assault against Christine Ford in 1982 when he was 17 years old, and she was 15 at a house party. The accuser’s four witnesses that she presented could not corroborate her story and it fell apart. Kavanaugh was confirmed and is the 114th associate justice of the nation’s highest court.

The Democratic Party played the process in an attempt to delay after the midterm elections, but failed. They also screamed for an FBI investigation and got one. However, within days, the investigation was complete and nothing new was learned. It was a national disgrace led by the left.

The left threw the vilest crime against a man who later admitted on national television that he was a virgin until “well after college.” Kavanaugh gave a historic speech in self-defense before the judiciary committee and also said that he was not going to vacate the nomination. He refused to let his name get ruined for the sake of Democratic Party politics.

The Democratic Party has gotten their way for decades. They mastered the art of using identity politics to manipulate Republican colleagues into getting their way. The left simply called the right sexist, racist, misogynistic, Islamophobic and so on and they always backed off, so Democrats won. This time was different.

In most cases, Republican leadership would have convinced the president to withdraw his nominee and put someone the Democrats would vote to confirm, but that never happened. Instead, Kavanaugh pushed back and asked for a hearing under oath when the accusation arose and was supported by Trump.

Trump is a self-described counter puncher and rarely goes after anyone without provocation, despite what the media portrays. He watched Kavanaugh’s speech on television and expressed his admiration of Kavanaugh’s defense and defiance of the Democrats.

Trump taught Republican leadership that it is okay and beneficial to push back on Democrats the last two years, and it appears the message was received. He pushed back on lies, and right-wing voters loved it. When Democrats criticize Trump, he responds. At first, his style was hated by most except his base, but he did not care. After almost two years, it looks like right-wing leaders adopted Trump’s style regarding Democratic Party attacks and pushing back.

As Orrin Hatch (R-UT) was getting on an elevator at the Senate building, anti-Kavanaugh protestors verbally attacked him. Hatch waved them off with his hand which triggered the group. He told one that when they grow up, he would be ready for them, making them even more irate. Would he had done this under Romney, Jeb, or any other establishment Republican? It is hard to say, but history suggests no.

In a presser with the media, Chairman of the judiciary committee, Chuck Grassley (R-IA) scolded the press for their obvious bias against Kavanaugh. He recounted an incident when both anti and pro-Kavanaugh groups visited his office. According to Grassley, pro-Kavanaugh individuals asked to be interviewed but got told no, and the media was only interested in people opposed to the nominee. Would Grassley have done that if Trump were not the president? Chances are no.

Republicans refused to let left-wing politicians get their way. If anyone else was president, Kavanaugh may not have gotten to a committee vote.

Trump has been criticized copiously for his strained relationship with the media and propensity to bluntly speak out against the left, but it appears that he has given a backbone to Republicans who seem to understand that it is okay to push back and win. Now, we have Justice Brett Kavanaugh. Trump’s most significant victory yet.