Watch: Orrin Hatch Is An Absolute Savage To Anti-Kavanaugh Protesters Trying To Harass Him 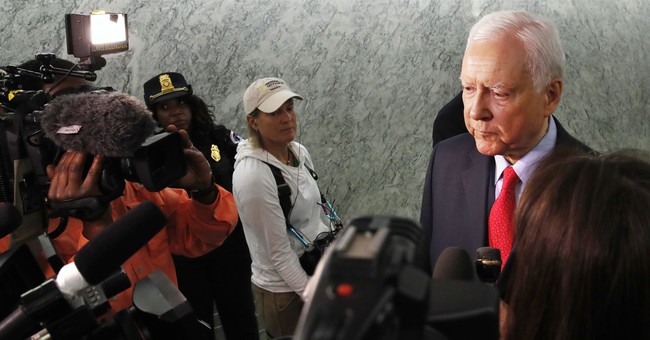 If there’s anyone who knows this Kavanaugh conformation battle is a knife fight, it’s Sen. Orrin Hatch (R-UT). Also, after this exchange with anti-Kavanaugh protestors, I’m really going to miss him.

President Trump nominated Judge Brett Kavanaugh to fill the vacancy left by Anthony Kennedy over the summer. The confirmation hearings, while intense and rambunctious at times, were completed without delays. We were nearing the goal line. And then, at the last minute, sexual misconduct allegations were hurled at Kavanaugh. Three accusations were lobbed, and all three lacked evidence or corroborating witnesses. It was a political hit job from Democrats.

Now, moderate Republican senators have taken to the bunker, not saying where they stand on this nomination. The final vote is this Saturday. On top of the moderate Republicans possibly being flaky, Sen. Steve Daines (R-MT) has become a key player since his vote is needed—and he’ll be back home in Montana for his daughter’s wedding. He is willing to fly back to D.C. if his vote is needed.

Still, as the vote draws nearer, left-wing protesters have encamped themselves on the Hill. Hatch, who has been one of Kavanaugh’s staunchest defenders, went into beast mode against a group of anti-Kavanaugh protesters looking to confront him. He bluntly told them to “grow up” before waving them away (via WaPo):

Hatch waves off protesters screaming at him.

Protester "Don't you wave your hand at me. I wave my hand at you."

Protesters triggered, melt-down, scream at the 84 year-old Hatch, "Why don't you grow up!!!"

Video of the incident ricocheted around social media Thursday night, the latest in a string of confrontations reflecting the heated emotions coursing through the Capitol amid the fight over Brett M. Kavanaugh’s Supreme Court nomination.

In the video, a group of protesters confronts Hatch, a member of the Senate Judiciary Committee who has been front and center in the confirmation process, as he gets into an elevator in the Hart building. The video starts mid-confrontation, with the voice of a woman asking Hatch over a wall of staffers why he isn’t “brave enough” to talk to her and her group. Hatch waves his hand in midair.

“Don’t you wave your hand at me,” the woman says.

Hatch looks at her and says, “When you grow up, I’ll be glad to” talk to you. The comment incenses some of the protesters.

“How dare you talk to women that way?” one says.

Hatch waves at the group from the elevator as they continue yelling at him.

Kathy Beynette, the protester whose voice is the one predominantly heard in the video, said in an interview that she was deeply offended by Hatch’s remarks.

You’re not this dense, Kathy. This is war. This is a political fight—and Orrin Hatch didn’t have time for your crap. It’s quite clear that Sen. Hatch, and most of the Senate GOP, won’t be bullied by the progressive left into changing their votes. It’s Sens. Jeff Flake, Susan Collins, and Lisa Murkowski that we have to worry about. Still, Hatch has some fight in him, and the Left’s antics throughout this whole clown show have been outrageous. It’s time to vote. It’s time to hopefully confirm Kavanaugh. Enough games. Yes, wave these people away. The blitz is over.

Even at 84 years of age, Hatch still has a beast mode. Enough of one to trigger a bunch of anti-Kavanaugh activists. Good on him. Stay the course, GOP. The next test is this cloture vote at 10:30 AM.