First it’s Silent Sam. Next, SJW’s Will Come for the Constitution.

John Dempsey
|
Posted: Aug 23, 2018 12:00 PM
Share   Tweet
The opinions expressed by columnists are their own and do not necessarily represent the views of Townhall.com. 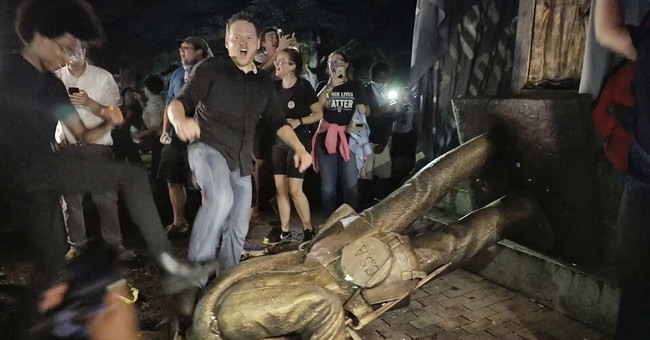 The American Civil War was indeed a horrific time in America’s history. However, the reason for the war was even darker. Slavery was cruel, disgusting and stomach turning. If war was the only way to end slavery, then so be it. Enslaving fellow human beings based on their skin color, and attempting to dehumanize them for their skin tone is just as sickening.

On August 20, a group of people gathered on the campus at the University of North Carolina in the quad area to protest a statue that was placed in 1913 by the United Daughters of The Confederacy. The monument is known as Silent Sam. It is to honor the UNC students who fought and died in the Civil War.

The figure doesn’t condone serfdom. It is a memorial to remember why there was a war, and to also remind those how far we have moved from that time as a country. Of course, Confederate soldiers felt they were morally correct at the time, but that doesn’t mean southern soldiers actions were righteous. Individuals who damage something because they don’t like what specific items represents are proper either.

After several hours of chanting and demanding that the effigy be taken down, the group of protestors turned into an unruly mob that decided to take the dismantling into their own hands. Some people in the crowd were able to rip the figure from its base, throwing it to the ground.

The actions of Social Justice Warriors (warriors used very lightly here) will not stop at Silent Sam. They intend to destroy the founding of the United States of America. They believe that colonizing the east coast was morally unjustified. Some of the founders had slaves, and they created the founding documents. Therefore, anything that was used to form the founding is immoral as well.

SJW’s will not stop attempting to govern using mobs. After they have successfully removed all of the high profile images, they will aim for the American flag. Crazed leftists deny the founding of America, and believe in the abolishment of our banner of freedom as well.

Kaepernick and his minions in the NFL are a prime example. The failed professional quarterback has not said what exactly he would like to see done to the flag or anthem, except it is “racist.”

The Constitution was written by the same men whom the left hates with a burning passion. Ending the Declaration of Independence, Constitution and Bill of Rights is the ultimate goal for the SJW. In the mind of a militant leftist, they have the moral superiority to end America as founded. SJW's have a false sense of virtue, and that makes them believe that no matter whom they injure, or destroy they are justified.

Leftists are the most immoral people ranging from abortions rights to tearing down traditional families, causing children to grow up in unstable homes that lack intended design of a mother and father.

If SJW’s wanted Silent Sam gone, they could have petitioned the school, and pressured them enough to the point it would have probably been removed. However, that would be too quiet. Militant leftists want to cause a scene to make a point. By generating a riot at as many places as possible, a faux crisis is created, and that allegedly clouts them, but it doesn’t. Most American’s are tired of this small fraction of the Democratic Party. That is why President Trump was elected.

If mob rule is allowed to continue, the flag will be next then the Constitution.

America is a country based on the rule of law, not the rule of a mob. Prosecute the vandals under the proper state statutes.

Share this on Facebook
Tweet
Rand Paul Tweets Out Asking If 'Snot-nosed Censors at YouTube Will Come to My Office and Kiss My …'
Rebecca Downs
Loudoun County Public Schools Remove Sexually Explicit Book from Library
Landon Mion
Michigan Dems Say Parents Shouldn’t Tell Schools What to Teach
Landon Mion
Here's the Interesting Tidbit About All Those Doctors Who Called Joe Rogan a Menace to Public Health
Matt Vespa
Walensky Says She Will Improve Messaging Surrounding COVID-19
Madeline Leesman
The Real Reason Australia Deported Tennis Star Novak Djokovic...And It Had Nothing to do With COVID
Matt Vespa