Don’t Panic if There Is a Government Shutdown

John Dempsey
|
Posted: Jul 30, 2018 9:30 AM
Share   Tweet
The opinions expressed by columnists are their own and do not necessarily represent the views of Townhall.com. 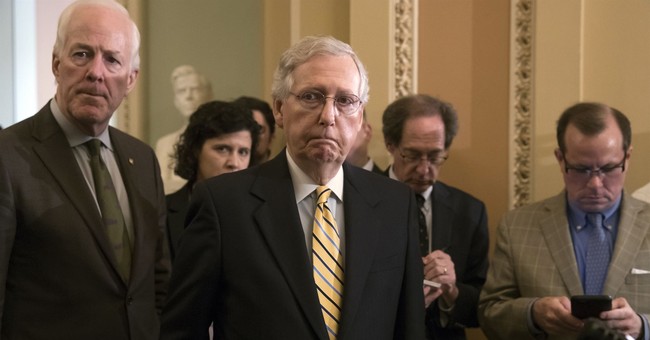 Immigration continues to stay at the forefront of political debates. The left is relying heavily on illegal aliens obtaining amnesty. Illegals aren’t people to leftists. They are an opportunity to legalize new voters that will replace the lost voters since the 2016 election. President Trump knows this. He tweeted Sunday that shutting down the government is an option if the Democratic Party continues to obstruct his agenda. Trump has been ahead of political opposition since he announced he’s running for president, so there is no need to panic on the right.

No, it is not ideal to shut down the government, especially before a midterm election. However, Democrats are not the only ones who may force this. Senate Majority Leader Mitch McConnell is much to blame. On Friday, while speaking on a Kentucky radio show, he said that additional funding for the wall is getting pushed back until after the midterm elections.

Politically, McConnell is skittish. The border wall was Trump’s number one issue he ran on during the Republican primary that he handily won; and it’s still important. He went onto easily defeat Hillary Clinton much to her and the Democratic Party’s chagrin. Nothing has changed about the power of chanting “build the wall!”

It is no secret that McConnell is not Trump’s biggest fan. The swamp still exists, and McConnell is part of it. One must wonder if he is trying to quietly take away a winning issue for the candidates the president has endorsed nationally.

Even if McConnell is playing games in the background, Trump should cast all the blame on Democrats.

The wall is an essential part of national security. McConnell should come out and explain why he doesn’t want to fund the wall before the midterms. Otherwise, Trump needs to blast the Senate leader. It looks like McConnell is playing obstructionist with the president. There are millions of Americans who live on the border and understand the importance of this issue.

Trump understands what he is doing. It is evident that one doesn’t need to be a “swamp creature” to make Washington D.C. work. The president has surrounded himself with great advisors as well, or he would not have succeeded in so a quick time.

Shutting down the government would not be a major crisis, even though it will get portrayed that way. Only non-essential agencies close down, and those people eventually get paid. Over half of the IRS will close down, which is a reason for a shutdown in itself.

The media will have a field day. Trump will be at complete fault, even though he doesn’t pull the purse strings. The media will spin it as “Trump’s Republican Congress doesn’t agree with him, or the Republicans are in disarray.” This is where Trump would need to get his message out to combat the media.

The American people who already stand behind Trump won’t leave his side. Those who are on the fence must get the message of how vital the wall is to security. The president should stress that Democrats are playing politics with the safety of American citizens.

Historically, government shutdowns aren’t uncommon. The longest was 21 days under President Clinton, and the shortest was nine hours under Trump. The world didn’t end.

Trump’s base will be elated if he shuts the government down to fund the wall. It’s a no-brainer.