Why Race Relations Have Gotten Worse Under Barack Obama

John C. Goodman
|
Posted: Jul 14, 2016 9:58 AM
Share   Tweet
The opinions expressed by columnists are their own and do not necessarily represent the views of Townhall.com. 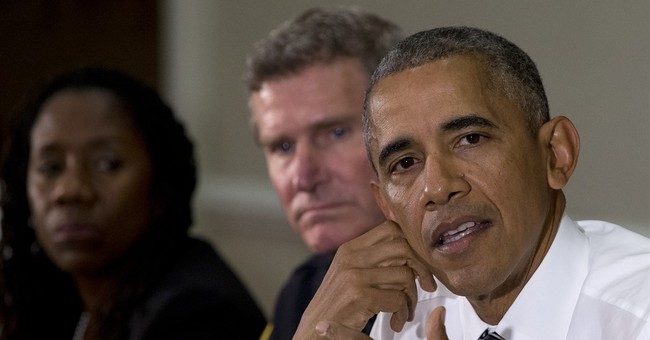 There are three things you need to know about modern American politics: (1) the black vote is hugely important to the Democratic Party, but (2) less than half of black voters actually agree with the Democratic Party’s view of government, and among those who do agree a great many are routinely mistreated by the very politicians they vote for; therefore (3) the only practical way to ensure that the vast majority of black voters reliably and enthusiastically turn out for the Democrats is to avoid debating real issues and focus instead on racial politics.

Roughly one fourth of Democratic voters are black and in some states the majority of all Democrats are black. The implications of these facts are not lost on the Democratic establishment. If, say, one third or even one fourth of black voters voted for a Republican, or if they decided not to vote at all, the results for Democrats would be disastrous.

But why do black voters prefer Democrats? That’s not an easy question to answer. Less than half (47 percent) consider themselves “liberal,” not much different from the number who consider themselves “conservative” (45 percent). And even among the self-described “liberals” black voters seem to get a raw deal from the people they vote for. In our central cities, many black parents send their children to the worst schools, they receive the worst city services and they are exposed to the nation’s worst environmental hazards (think Flint, Michigan). In almost all cases, these cities are run by Democrats.

In a previous post, I reported on the remarkable history of my home town Waco, Texas. During the years of segregation and Jim Crow laws, black voters consistently voted for the very Democrats who enforced those awful practices.

Would they have voted for Republican candidates if the Republicans had campaigned for black votes more aggressively or approached them in a different way? I don’t know. I do think that Democrats today sense there is a danger of losing the relationship. After all, one of the three blacks in the US Senate is a Republican and more than one-fourth of black voters in Ohio voted to reelect Republican Governor John Kasich.

Roughly 90 percent of blacks identify as Democrats. But how can the party ensure that they will stay that way and continue to vote that way? The answer Democrats have chosen is what I call racial politics.

According to a raft of liberal commentators, the Republican Party has been sending racist messages to white voters for years. Both conservative and liberal commentators have accused Donald Trump of the same thing. However, these charges require us to sift through all sorts of subtleties. On the Democratic side, subtlety has never been a problem. After all, if you are subtle some voters might miss the point.

I’ll bet every reader of this column has heard about the Willy Horton commercials that George Bush (41) ran against Michael Dukakis in 1988. They are supposed to be an example of Republicans playing on racial fears, even though the issue was first raised by Al Gore in the Democratic primary. But, have you ever heard about the James Byrd commercials?

On the eve of the 2000 election, the NAACP ran television and radio ads aimed at black voters implying that as governor, George W. Bush was indifferent to the death of James Byrd, a black man who was chained and dragged to death behind a pickup truck by three white racists.

To my knowledge, Al Gore never condemned these commercials and no member of the mainstream media every pressed him to do so. Race baiting by Democrats was ignored then, just as it is today. (See here, here and here.)

In 2012, George Zimmerman, the neighborhood watch coordinator for a Florida gated community, fatally shot Trayvon Martin, a young man with a checkered past, during an altercation. Ordinarily, no one who lived more than 50 miles away would have ever heard about the case. However, “watch coordinator” sounds sort of like “police officer” and it was initially reported that Martin was black and Zimmerman was white. The national news media pounced. Virtually every news report suggested that racism was a factor and that the incident was an example of a national problem. (See the summary here.)

After it was revealed that Zimmerman was Hispanic and from a multiracial family (that included blacks), the mainstream media didn’t back off. They doubled down. Several media outlets, such as CNN and The New York Times, began describing Zimmerman as a "white Hispanic." NBC doctored an audio tape in a way that suggested Zimmerman’s wrong doing. Before long, nearly 90 percent of African Americans called the shooting “unjustified.” When Zimmerman was acquitted, that was even more fodder for the race baiting fire.

So how is Trayvon Martin different from the 13,000 other people who are murdered each year, including about 6,000 African Americans? Was he a talented artist? A musical prodigy? A budding entrepreneur? It’s better than that. In the middle of a tough re-election campaign, President Obama announced that "Trayvon Martin could have been me, 35 years ago."

So there you have it. The person George Zimmerman shot and killed could have been a future president of the United States! (Provided voters could overlook his criminal record, that is.)

Barack Obama is the most partisan president in our life time and he seems to understand almost instinctively that racial polarization is essential to the Democratic Party’s electoral strategy. (See

Did those comments cause Black Lives Matter marchers in Dallas to chant “Pigs in a blanket; fry ‘em like bacon”? It certainly didn’t discourage it.

And although the president’s speech in Dallas on Tuesday was supposed to be unifying and conciliatory, he again brought up the totally fraudulent case of Trayvon Martin and had nothing but praise for Black Lives Matter.

All this is being echoed by Hillary Clinton, whose campaign commercials shamelessly mention Trayvon Martin and who now decries “systematic” and “implicit bias” in police departments.

The national Democratic Party has a stake in the problem, not in its solution. The national news media is only too happy to help meet their needs.

PS. A new study by a team headed by an African American Harvard economist finds there is no bias against black civilians in police shootings. Here are more surprising findings reported by Heather Mac Donald. Also, see her Wall Street Journal editorial yesterday.