How Dishonest is Barack Obama? 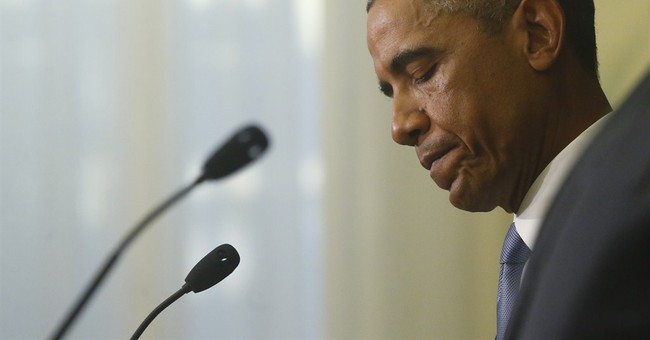 A week ago Friday was an unusual day for the editorial page of The New York Times. An unsigned editorial in the paper lashed out at the president for his public statements about reengaging in Iraq. A Paul Krugman column attacked the administration’s defense of the new trade agreement. Both pieces said the administration was being … (how shall we say it?) … dishonest.

Granted, this was nothing like the language Krugman and the Times typically use to describe Republicans. A few days earlier, Krugman accused Jeb Bush of “cowardice and vileness” with respect to his statements about Iraq. In a column on Jeb’s brother and the original invasion of Iraq, Krugman wrote “We were lied into war.” “It was worse than a mistake,” he added, “it was a crime.”

Still, Krugman and the Times are normally the most visible and reliable apologists for the Obama administration. On “The Escalation of Unauthorized Wars,” the Times doesn’t accuse President Obama of “lying” or committing “crimes,” but it comes close:

In his claim that the administration is being dishonest in defense of its trade policies, Krugman tries to sugar coat his attack with this kind of rhetoric:

One of the Obama administration’s underrated virtues is its intellectual honesty…. In the policy areas I follow, the White House has been remarkably clear and straight forward about what it is doing and why.

Wow. How quickly memories fade. Everyone knows that Krugman follows health care, for example. Does he really not remember, “If you like the health plan you have, you can keep it.”? Or, “If you like your doctor, you can keep your doctor.”? We now know from insider reports that the White House knew these statements were false at the time the president was making them.

The federal budget is another matter Krugman follows and right now Congress and the president are wrangling over the sequester (across-the-board spending cuts) they agreed to a few years back. How many times has the president and his spokespeople tried to blame the sequester on the congressional Republicans? Yet it is incontrovertible that the idea first came from the White House.

Sometimes when it isn’t clear whether the word “dishonest” applies, the context is suggestive. The other day, the President told a group of Coast Guard graduates that global warming is a threat to our national security. It was a controversial claim made at a controversial time and place. So a lot of thought must have gone into the speech. Yet only a few days earlier the President approved Shell Oil’s request to drill for oil in the Arctic Ocean.

Certainly these actions are inconsistent. Lots of people are inconsistent. Or, is more involved? Did the president really believe that carbon fuel is a threat to our security when he was speaking to the graduates? Did he have that same belief when he approved off shore drilling?

One of the president’s finest moments was his appointment of Alan Simpson and Erskine Bowles to lead a bi-partisan commission to recommend ways to curtail runaway entitlement spending. This reflected a position he took as far back as the 2008 Democratic primary and he promised both gentlemen that they had his full backing – regardless of their recommendations. Yet when the Simpson/Bowles report was released the president acted as though he had never heard of either one of them.

Okay. That’s a broken promise. Or, is it more than that? Did the president really believe the promise when he made it?

In 2008, candidate Obama promised to heal wounds, end partisan rancor and pull the nation together. “Yes, We Can” was a promise to unite the American people and members of both parties behind common goals.

Yet President Obama has turned out to be the most partisan and the most polarizing president in our life time. And, yes, it really is his fault. Granted, Republicans have given tit for tat. But the president promised to lead.

In his first State of the Union address he gratuitously insulted the members of the Supreme Court, who were sitting in the front row honoring him. He invited Paul Ryan to a gathering and proceeded to humiliate him on national TV. For the most part, the president doesn’t socialize with Republicans or even talk to them. But he doesn’t talk to Democrats either. He hasn’t done anything to bring about togetherness on either side of the aisle.

Think back to the 2008 campaign. Did the president really mean what he said about bringing people together?