Singapore Has Found A Workable Alternative to the Welfare State 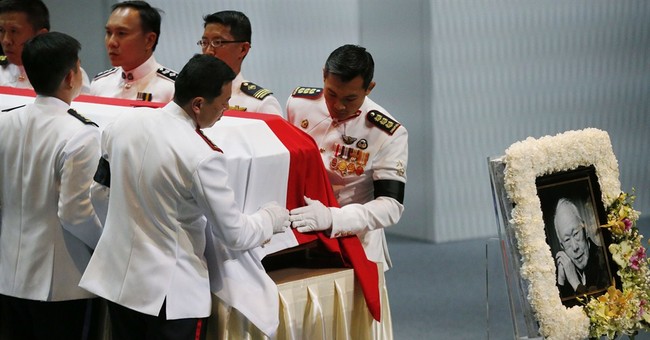 Lee Kuan Yew, the first prime minister of Singapore, died last week at age 91. Almost every obituary has remarked on the radical transition his leadership heralded. As John Fund wrote at National Review:

“By embracing free trade, capital formation, vigorous meritocratic education, low taxes, and a reliable judicial system, Lee raised the per capita income of his country from $500 a year to some $52,000 a year today. That’s 50 percent higher than that of Britain, the colonial power that ruled Singapore for 150 years. Its average annual growth rate has averaged 7 percent since the 1970s.”

Part of the reason for Singapore’s remarkable climb up the international income ladder is bread and butter capitalism. The Frasier institute’s Freedom of the World report lists Singapore as the second freest economy in the world -- right behind Hong Kong. As Frasier scholars have demonstrated year after year, economic growth and free markets go hand and hand.

But Singapore has done something even more remarkable than its economic accomplishments. It has built an alternative to the European style welfare state. Think of all the reasons why people turn to government in other developed countries: retirement income, housing, education, medical care etc. In Singapore people are required to save to take care of these needs themselves.

At times the forced saving rate has been as high as 50 percent of income. Today, employees under 50 years of age must set aside 20 percent of their wages and employers must contribute another 16 percent. These funds go into accounts where they grow through time until specific needs arise. For example, one of the uses for these savings is housing. About 90 percent of Singapore households are home owners – the highest rate of home ownership in the world.

In health care, Singapore started an extensive system of “Medisave Accounts” in 1984 – the very year that Richard Rahn and I proposed “Medical IRAs” for America in the Wall Street Journal. Today, 7 percentage points of Singapore’s 36 percent required savings rate is for health care and is deposited in a separate Medisave account for each employee. Individuals are also automatically enrolled in catastrophic health insurance, although they can opt out. When a Medisave account balance reaches about $34,100 (an amount equal to a little less than half of the median family income) any excess funds are rolled over into another account and may be used for non-health care purposes.

For many years, the only two scholars in the Western world who paid much attention to Singapore were Washington University economist Michael Sherraden and me. Michael approached the Singapore experience from a left-of-center perspective and I came from the opposite direction. We both ended in the same place: this is an alternative to the welfare state that works.

Lately, quite a number of other scholars have discovered Singapore, especially its health care system – again, with both right and left finding a lot to admire. It’s taken almost three decades, but Singapore is now the subject of a book by Brookings Institution, a whole slew of posts by Austin Frakt and Aaron Carroll, and a good overview by Tyler Cowen, with links to other studies and comments.

“Step by step, the Singapore state created a new social policy system that had asset building as its central structure…. In the world of social policy, it would be hard to overstate the exceptionality and the extent of this innovation…. During the past 25 years, Singapore policy has taken important steps toward lifelong asset building, beginning very early in life. These innovations include EduSave, the Baby Bonus, Child Development Accounts, and related asset-building incentives.”

For John Fund, Singapore’s most significant accomplishment is the avoidance of the mistakes of other countries:

“I believe that the least appreciated part of Lee Kwan Yew’s legacy is his method of ensuring that one generation won’t bankrupt future generations by selfishly living beyond its means. It’s a welfare state that works, and one he always said was available to any political leader with the courage to tell his people the truth about the limits of government’s power to pass out goodies.”

For my part, I would summarize the philosophy of Singapore as follows:

If the United States had adopted a similar approach to public policy, there would be no deficit problem in this country.