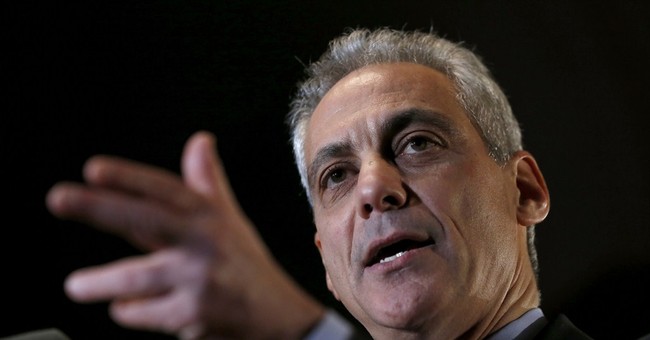 Here’s a shocker. Rahm Emanuel may not be re-elected as mayor of Chicago. The reason? Emanuel has been siding with poor, minority children who want a better chance in life against Chicago teachers unions who view the public schools as a jobs program rather than a place to educate children. Guess which of these two groups is not allowed to vote?

When he was running for office, John Edwards reflected the way that many Democrats would probably like to think of themselves. Edwards talked about two Americas – which he characterized as the haves and the have nots. He promised to raise taxes on the richest two percent and spend the money on … well …. If you weren’t listening very carefully you might have assumed he was going to spend it on the poor.

But there is a problem with that.

Taking from the rich mainly means taxes. But what does it mean to take from the poor and give to the middle class? It means five things:

1). Closing off job opportunities in order to protect the employment of solidly middle class workers from competition from people who would like to make it into the middle class.

3). Closing off access to the marketplace for such essential services as housing, transportation, and medical care – again for the purpose of protecting entrenched (middle class) special interests.

4). Imposing regressive taxes which disproportionately fall on low-income families in order to fund services for people who are definitely not poor.

5). Catering to the bureaucracies that administer what we loosely call the “welfare state,” rather than looking out for the people who are supposed to be helped.

By the way, it’s only an occasional Democrat who even talks about helping the poor. Barrack Obama rarely ever does. His latest big push is for “middle class economics.” This isn’t a set of reforms for those at the bottom of the income ladder. It’s for those in the middle. Here is how the president’s three sets of initiatives were summarized by Josh Barro in The New York Times:

"The first consists of tax and regulatory provisions aimed at supporting middle-income workers. He would offer tax credits for child care and college tuition, and a tax credit for the second earner in households where both parents work. He’d also require employers to provide paid sick leave, and he’d raise the minimum wage. The second pillar is policies aimed at making workers more productive, so they can command higher pay. This includes proposals to expand access to community college. The third pillar is policies aimed at increasing overall economic growth, like infrastructure spending and trade deals."

What would all this do for the average middle income family? According to the Urban Institute/Brookings Institution Tax Policy Center, the benefit for families in the middle would be a paltry $12 a year. According to the Treasury Department, the benefit would be closer to $150. Either way, that’s small potatoes.

Meanwhile, back to Chicago. Unlike the president, Rahm Emanuel really is doing things that affect lives in a major way. He is closing bad schools and using the money saved to expand privately run charter schools. He is overhauling the teaching profession by repealing tenure, trimming benefits and paying teachers in part based on how well their students score on standardized tests.

Stephanie Simon explains why all of this is so important to the Democratic Party nationwide:

"Democratic mayors and governors across the nation are increasingly standing up to their traditional allies in the teachers unions to demand huge changes in urban school districts — and labor is frantically, furiously fighting back. Local and national unions have made Emanuel a top target, pouring resources into the effort to oust him. If they succeed, they’ll gain momentum, not to mention a huge PR victory."

What Mayor Emanuel is doing is especially hard if the people you are trying to help don’t want to be helped. That was the problem with school reform in the nation’s capital. It’s also a problem in Chicago.

A Chicago Tribune poll last summer found 65 percent of registered voters, including 77 percent of black voters, disapprove of Emanuel’s handling of the public schools. Further, 62 percent side with the union and just 23 percent choose the mayor.