Are We Going Broke? 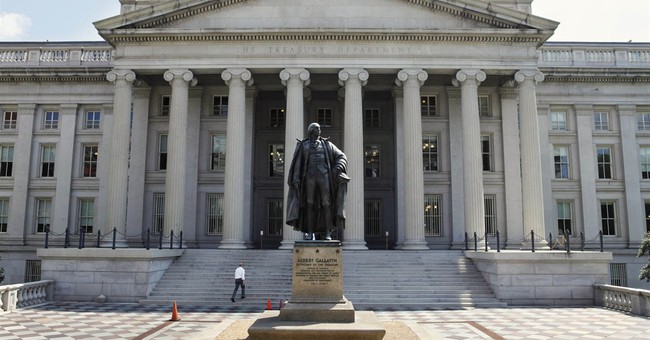 If you listened only to Barack Obama and his acolytes on TV talk shows you would think that the federal government’s finances got a lot better last year. In fact, they got worse.

Here is the latest White House spin: the official federal deficit is only 3% of GDP – way below the 10% figure it reached only a few years ago. In terms of dollars and cents, the U.S. government’s deficit is expected to be $514 billion this year, according to the Congressional Budget Office (CBO). That’s the number you get when you look at cash flow. It means the government will spend $514 billion more than it takes in during the 2014 fiscal year.

But this kind of accounting ignores federal government liabilities that will become due in future years. For example, over the course of a year millions of people earn Social Security and Medicare benefits as well as other government entitlement benefits that will have to be paid in future years. When you total all that up (and subtract expected future revenues to pay those benefits), we added $5 trillion in debt last year according to Boston University economist Larry Kotlikoff.

Another way to look at the problem is to consider not just one year’s deficit, but the total amount of debt that government has accumulated. US debt held by the public is currently $12.6 trillion, or about 75% of the size of our economy the way the CBO measures things. But in arriving at that number, the CBO doesn’t recognize promises to pay Social Security checks and medical bills as real obligations.

That’s a strange way of accounting and Kotlikoff and his colleagues reject it. Instead they project the value of all the promises we have made under Social Security and other entitlement programs – benefits that ordinary citizens believe they have earned – and subtract expected future revenues, given the current tax law. The difference is an unfunded liability that is every bit as real as promises to make future interest payments on bonds and Treasury bills.

Calculating obligations in this way, Kotlikoff estimates that the total unfunded liability of the federal government is $210 trillion, or about 12 times the size of our economy. Writing in The New York Times, Kotlikoff says:

The fiscal gap — the difference between our government’s projected financial obligations and the present value of all projected future tax and other receipts — is, effectively, our nation’s credit card bill. Eliminating it, would require an immediate, permanent 59 percent increase in federal tax revenue. An immediate, permanent 38 percent cut in federal spending would also suffice. The longer we wait, the worse the pain. If, for example, we do nothing for 20 years, the requisite federal tax increase would be 70 percent, or the requisite spending cut, 43 percent.

And the tax increase, by the way, doesn’t work unless the money is sequestered and invested. It can’t just be deposited in the Treasury’s bank account and spent on other things.

So is there any way out of this? Kotlikoff and a lot of other economists think we need to start with honest accounting: Former government officials from both parties, and more than 1,200 economists, including 17 Nobel laureates, have endorsed something called the Inform Act. It would require the federal government to do the kind of accounting that Kotlikoff and his colleagues do: project promises the government is making years into the future and along with expected revenues, given current tax rates. The difference is the government’s unfunded liability.

And why are so many economists calling for this reform? Kotlikoff says:

What we confront is not just an economics problem. It’s a moral issue. Will we continue to hide most of the bills we are bequeathing our children? Or will we, at long last, systematically measure all the bills and set about reducing them?