The Greatest Anti-Poverty Program the World Has Ever Known 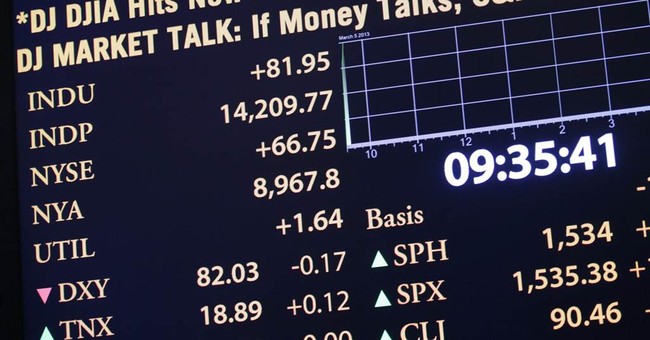 Economic growth is a miracle cure.

For the last 50 years real income per person in the United States has been growing at a rate of about 2.3% per year. Although that may not sound like such a big deal, that small increase adds up year after year. So much so that real incomes will actually double every 31 years. If we think of the average year for child birth as being close to age 31, then income will double for every generation.

Let's assume you are in an average income family earning about $50,000 a year. If your children also earn an average income, by the time they grow up and reach your age they will be earning $100,000 a year — and that's in current dollars. If your grandchildren follow the same trajectory, by the time they reach your age they will be earning $200,000. That's what Barrack Obama calls rich. Your great grandchildren will earn $400,000 — which is enough to put them in the top 1% of the income distribution, were they alive today!

Provided our descendants don't do dumb things and stop this miracle from continuing to produce its bounty, the future just gets better and better. As Stephen Landsberg has noted:

…[I]f that 2.3 percent growth rate continues, then in fewer than four hundred years, your descendants will earn about $1 million per day — a little less than Bill Gates's current income, but at least in the ballpark. I want to make clear that these are not some future inflation-ravaged dollars we're talking about; they're the equivalent of a million of today's dollars.

Now here is something that may surprise you: The economic growth that you and I take for granted is in fact very rare. For almost all of the history of human existence, there was no growth at all.

Landsberg puts the beginning of the modern human race at about 100,000 years ago. If so, then for 99,800 of those years all of mankind was living at the subsistence level. People in the Middle Ages were living no better than people at the time of Ancient Rome. And people in Roman times were living no better than people were living 10,000 years earlier — before the agriculture revolution. Civilizations rose and fell; there were wars, technological innovations and even international trade.

Yet through it all the average person lived on a little better than the equivalent of $1 a day for almost all of human history. If they were lucky, they might have had $2 a day. And if they were really lucky they might have had as much as $3 a day. But that's about it — unless you were a king or a queen, and even they didn't have much by modern standards.

Then, in the late eighteenth century-just a couple of hundred years ago, maybe ten generations — something happened. People started getting richer. And richer and richer still. Per capita income, at least in the West, began to grow at the unprecedented rate of about three-quarters of a percent per year. A couple of decades later, the same thing was happening around the world. After thousands of years of stagnation, life started improving from one year to the next, and before long people started taking improvements for granted. Today we expect our cars, our computers, our medicines, and our entertainment systems to keep dazzling us with something new. But that's not how it was before the Industrial Revolution. That three-quarters of a percent annual growth rate, once it got under way, must have seemed miraculous.

But then it got better. By the twentieth century, per capita real incomes — that is, incomes adjusted for inflation — were growing by 1.5 percent per year, on average, and since 1960 — for almost fifty years now — they've been growing by about 2.3 percent.

Unfortunately, economic growth has not reached everyone. There are about one billion people in the world today who are still living on $1 a day. Another one billion live on $2 a day. Roughly one-third of all the people on the planet right now are living no better than their ancestors lived for millennia.

Now here is another surprise. Given what we know, you would think that economists, politicians and almost everybody in the public policy community would be spending every waking minute thinking about:

What makes growth rates higher rather than lower?

What can we do to encourage growth and make sure it continues?

In fact, politicians rarely mention the subject, nor does the public policy community. As for economists, interest in economic growth has been anemic. True, Adam Smith wrote an entire book on An Inquiry Into the Nature and Cause of the Wealth of Nations. But while he had much to say about the value of free markets and the cost of unwise regulation, he never gave a satisfactory explanation of the puzzle of why some nations grow and others do not. Nor really has anyone else.

For my money, I think that culture has a lot to do with it. But that of course is considered an abdominal idea on most colleges.

What little economists do know about growth has been summarized by John Hood, president of the John Locke Foundation, who has reviewed 528 economic studies, published from 1992 to 2013. Of these, 112 of the academic studies focused on state and local taxes:

• Only two of these studies found a link between higher tax burdens and stronger growth.

• Seventy-two of them, on the other hand, showed that taxes negatively impacted economic growth.

The evidence also indicated that states do not invest effectively and that regulations harm the economy:

• While education outcomes appeared to be correlated with economic growth, education expenditures did not. Of 79 studies on the subject, only 30 found a positive relationship between spending and growth in education, while 34 had mixed or insignificant results and 15 had negative results (due to the offset in growth from the additional taxes).

• A study that looked at the growth of major state government programs — from public safety to education to housing subsidies and health care — found that raising taxes to fund that additional spending almost always hurts economic growth. But slowing that spending and reducing tax rates, the study found, leads to higher investment and employment.

• Of 123 articles on regulatory policy, there was a positive economic effect from less regulation, not more, 67 percent of the time.

And here is the final surprise, given President Obama's rhetoric about concern for those at the bottom of the income ladder: Almost every policy initiative of the Obama administration has been anti-investment, anti-work, anti-production and therefore, anti-growth.