Income Equality: Why Doesn't the Left Hate the Lottery? 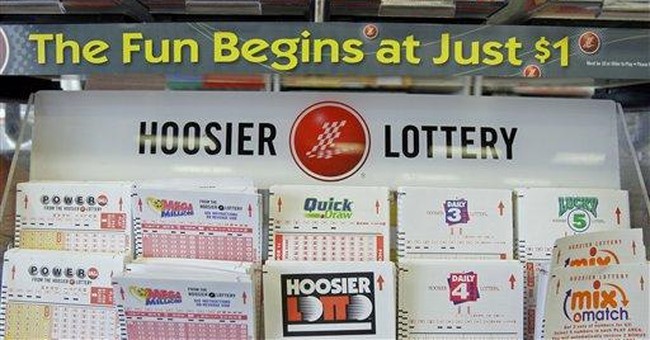 I can't think of any single act of government that creates more inequality than the lottery—at least per dollar raised and spent. Think about it. Thousands of (mostly below-average income) people buy tickets and, after the drawing, one of them becomes immensely wealthy. As far as I can tell, the single largest winner in the United States at $315 million was Jack Whittaker, a West Virginia businessman who was already well off when he won!

I can’t think of anything in the private sector that even begins to compare to this reverse Robin Hood redistribution from the poor to the rich and the nouveau riche. And remember, in order to pull it off, government first has to establish a monopoly, keeping private competitors (who would at least raise the poor bettor's expected return) out of the market.

If you really care about the ethics of income distribution , a lottery has wonderful heuristic value. For example, if you’re the kind of person who thinks that rich people don’t deserve their riches, that their wealth is the result of good fortune and chance, or that income is somehow collectively rather than individually generated—that is, if you are inclined to believe that life itself is one big lottery—then in your search for genuine unfairness, a real live lottery winner is hard to beat.

After all, the lottery winner didn’t do anything special. He did what everybody else did: he bought a ticket. His immense winnings are by definition the result of good luck and random chance. He surely did nothing to warrant, merit or deserve his wealth. Unlike in the economy, the winner's winnings really are made possible by the losers' losses. The lottery's rich get rich precisely because the lottery's poor become poorer.

So here’s the question of the day: When is the last time a liberal friend or acquaintance of yours complained about the lottery? When’s the last time The New York Times complained? Or The New Republic? Or Mother Jones?

I believe that the vast majority of people in the world do not care about inequality. People who buy lottery tickets are among them. When is the last time you heard of lottery ticket buyers supporting a tax on lottery winners with the proceeds given to the losers?

I also believe that most middle income folks do not care about it either and do not support blatant redistribution. I know that requires an explanation, so I will be brief.

Middle class voters support social insurance — with the government providing the types of insurance that the market provides imperfectly. That includes Social Security, Medicare, unemployment insurance, workers' compensation, etc. They also support temporary (but not long-term) relief for the able-bodied poor. Medicaid, food stamps, cash welfare, etc., are viewed as social insurance against bad luck. They also support other interventions (such as tariffs and quotas) that they justify in various ways.

What the middle class does not support, however, is the blatant taking from Peter and giving to Paul for no other reason than the fact that Peter has more and Paul has less. In other words, there is almost no support among ordinary people for equality for equality's sake. Put differently, the vast majority of people do not support legalized theft.

There is one group that does favor equality for equality's sake. This is the intellectual class. They not only favor equality, they are obsessed by it. Jim Gwartney pointed out to me the other day that in the advanced placement economics guide for high school students, making the income distribution more equal is listed as one of the important social functions of government. Really? Can you point to any state constitution or any city charter or anywhere in the U.S. Constitution or Federalist Papers or any other document where founding statesmen said that is a reason for establishing government?

Moving to the current day, is there any city, county or state government that has passed a resolution committing government to the goal of income equality? Don't most of these entities do the opposite — using tax abatements and other lures to attract high-income individuals and high-income job creators to their communities — thereby exacerbating the distribution of income.

The academic obsession with income equality is especially strange when you consider that most of them are not materialists. The reason many of them become academics is, in part, because they are willing to sacrifice income for leisure. Given this preference, wouldn't it make more sense to aim for equal leisure time, rather than equal incomes? I'll leave it with you as an exercise for the reader to figure out how that might work.

The third observation brings us back to where we began. The ability to gamble is the antithesis of the effort to equalize incomes. If you really thought that equality of income was so important, why would you be so callously indifferent to the inequalities generated every time the roulette wheel spins, every time the dice are thrown or every time the horses leave the gate?

I don't know the answer to that last question. Let me have your thoughts.