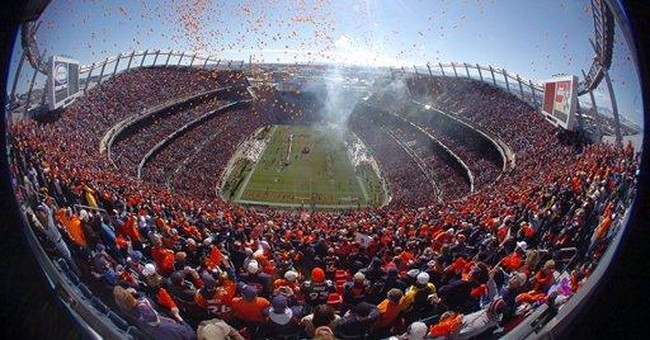 In my state of Colorado, early August used to be the season for celebrating the anniversary of our admission to statehood in 1876. But this year more people are preoccupied with the upcoming Democratic National Convention in Denver, where Obama's coronation will occur in a stadium and protesters hope to "recreate '68."

Many now regard the statehood anniversary as historical trivia, irrelevant today. It isn't, though. Colorado was only allowed by Congress to become one of the United States on the condition that its form of government would be “not repugnant to the principles of the Declaration of Independence.” Conservatives believe this is a good time to see how we measure up to that standard, sort of like taking a physical on your birthday.

The principles to be cherished are that we’re all created equal, that our rights are God-given not manmade, that government must therefore be limited not unlimited, and that tyranny whether from monarchs or majorities is an ever-present danger.

What this means is that the power of the state, its laws and taxes, commands and prohibitions, police and jails, meet boundaries in our lives and liberties which they may not trespass. Not everything is political. If someone believes everything IS political, even the CO2 we exhale, even men’s and women’s restrooms (headed for unisex status under a controversial new state law), he’s crossways to the Spirit of ’76, 1776 and 1876 both. That’s why Colorado Day still matters.

A study text for this year’s self-examination was provided nationally by the Weekly Standard in its July 21 cover story by Fred Barnes, “The Colorado Model: The Democrats’ Plan for Turning Red States Blue.” The Dems’ electoral winning streak here since 2004 isn’t just cyclical, Barnes contends. He thinks they’ve invented a whole new way of doing politics, potent and ready for export.

Maybe it’s that or maybe it’s routine stuff overhyped by Republicans as “an excuse for their tailspin,” in the article’s words. The GOP has indeed embarrassed itself with recent losses for governor, both legislative chambers, a Senate seat and two House seats. But the darker implications of Barnes’s analysis deserve attention no matter which party you favor – since a competitive and open political system is in everyone’s interest. If he is right, a lockdown for one side could happen in Colorado.

What the Standard calls “the Colorado Model” consists of a single, shadowy power supply with a seven-way delivery system that molds public opinion and ultimately moves votes. The Democratic Party itself plays little role until election day. But ostensibly unrelated outside groups churn out a permanent campaign every day year-round, like turbines driven by a river of undisclosed money from rich liberals.

Conspiracy theory? Hardly so, not when it’s all done in the daylight (financial disclosure excepted). Not when the liberals boast of what they do and we conservatives extend grudging admiration. Some of us founded the Independence Institute as a free-market think tank here two decades ago in the belief that the battle of ideas ultimately determines the battle of votes. The other side’s “Colorado Model” takes the same premise and has trumped us for now. Fair is fair.

Where a problem may arise is in the sophisticated and coordinated scale of this new swarm offense from the left. Inside their echo chamber, with the mainstream media naively cooperating, how can you be sure what’s true? How much power do you want such mega-rich "progressives" as Tim Gill, Pat Stryker, George Soros, and a few other zillionaires to have?

If by leveraging the liberties of limited government, the zealots of unlimited government were to entrench themselves in power, what freedoms would remain for the rest of us? What antitrust law restrains the progressive cartel? Such are the questions conservatives need to ponder about the "Colorado Model" as Howard Dean and the Obamaniacs get ready for their big do in Denver later this month.