John and Andy Schlafly
|
Posted: Feb 16, 2017 10:05 AM
Share   Tweet
The opinions expressed by columnists are their own and do not necessarily represent the views of Townhall.com. 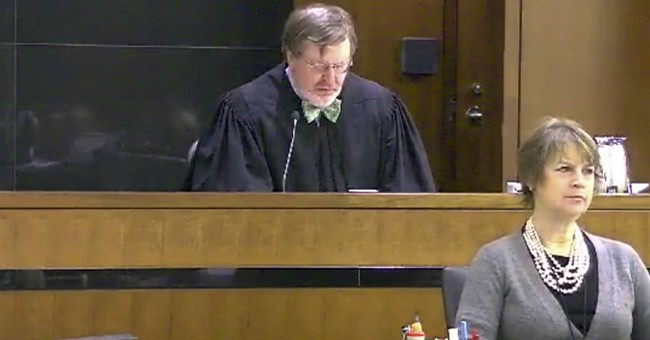 Judge Leonie Brinkema of Alexandria, Virginia has become the latest federal judge to join the “resistance” to Donald Trump. She joins Judge James Robart of Seattle, whose political decision against Trump was upheld by three judges of the Ninth Circuit.

Resistance has become the rallying cry for those who failed to defeat Trump at the ballot box last year. The well-funded Center for American Progress, which employs people connected with Hillary Clinton’s failed presidential campaign, said it hoped to be “the central hub of the Trump resistance.”

Resistance to Trump began on November 9, the day after the election, when the American Civil Liberties Union (ACLU) threatened to “see him in court” where it promised to unleash its “full firepower” to stop Trump. Resistance is the theme of the anarchists who sparked violent protests against Trump, including smashed windows and fires, from Berkeley, California to Washington, D.C.

Like Judge Robart before her, Judge Brinkema did not bother to cite any relevant law that supports her opinion against Trump's executive order being carried out. Instead, her opinion complained that campaign speeches by Trump and one of his surrogates, Rudolph Giuliani, revealed the President’s “religious prejudice” against Muslims.

Both judges falsely claimed there’s no “evidence” that suspending travel from 7 Muslim countries would protect Americans from terrorism, and Judge Robart even said that no visitor or refugee from any of the 7 countries had ever been arrested for terrorism. In fact, 72 individuals from those 7 countries have been convicted of terror-related crimes since September 11, 2001.

The list of 72 individuals, including at least one from each of the 7 countries on Trump’s list, was compiled last year by a Senate subcommittee led by former Senator Jeff Sessions, who is now our Attorney General. At least 17 of the convicted arrived in the United States as refugees, and at least 25 of them eventually became U.S. citizens.

The opinions of the two federal judges, Robart and Brinkema, constituted overreaching beyond the legitimate constitutional boundaries of the federal judiciary. That’s why the “disheartening” remark reportedly made by Trump’s nominee to fill Justice Scalia’s seat on the Supreme Court, Circuit Judge Neil Gorsuch, was a cause for concern among conservatives.

Certainly Justice Scalia would never have whined that criticism of judges was “disheartening” or “demoralizing,” another wimpy word from Judge Gorsuch. Scalia himself often used scathing language about other judges, such as the time he wrote that “I would hide my head in a bag” rather than join an opinion of his colleague, Justice Anthony Kennedy.

President Trump has at least one appointee vocal on this topic, White House policy adviser Stephen Miller, who did a round of Sunday interviews. Miller astutely observed that Judge Robart’s decision was a “judicial usurpation of power” because “it is a violation of judges’ proper role in litigating disputes.”

Defending Trump’s Twitter attack on “the opinion of this so-called judge” on Twitter, Miller said, “We don’t have judicial supremacy in this country. Of course one branch can criticize another branch of government.”'

Precisely 20 years ago, Phyllis Schlafly wrote against the growing problem of judicial supremacy in her monthly Phyllis Schlafly Report. "The most important duty of the 105th Congress is to protect America from judicial usurpation and restore our constitutional balance of powers among the three branches of our government,” she wrote then in words that ring just as true today.

“The Senate and House Judiciary Committees should hold extensive hearings on various proposals to stop the usurpation of power by the federal courts,” Phyllis continued. “Congress's investigative function is one of its most important duties, and now is the time to use it” with respect to the usurpation by the courts.

Presidents Thomas Jefferson, Andrew Jackson, and Abraham Lincoln all properly stood up against overreaching by the federal judiciary, setting precedents for future presidents to do likewise. Even liberal favorite President Franklin Delano Roosevelt drafted a speech to justify his decision to defy an adverse Supreme Court ruling in the Gold Clause Cases, if the Court ultimately chose to invalidate the government's abrogation of gold clauses in federal obligations. The Court then backed down.

President Ronald Reagan was tested early in office by the Air Traffic Controllers strike, and he rose to the challenge. So should President Trump.