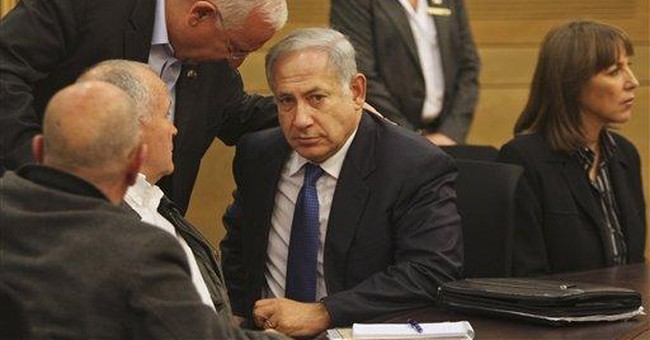 JERUSALEM—Speaking anonymously, senior Obama administration officials have been complaining about the prospect of working with a newly elected center-right government in Israel, led by Benjamin Netanyahu. The whispering campaign is getting louder in news reports in leading newspapers.

First of all, Democratic nations shouldn't tell other free societies whom they should elect. Barack Obama and his supporters might be blind to this because he was openly favored by most Western European leaders and media, but such meddling disrespects the democracies of other peoples.

The conventional wisdom, moreover, is wrong. The view that Netanyahu would make it harder for America to deal with Iran, forge a new Middle Eastern peace process or even work with Israel is simply reflexive bias masquerading as serious analysis.

Not only does Obama have better odds of a peace process that yields results with a Prime Minister Netanyahu, but he will also find much greater success in thwarting the Iranian nuclear threat.

Despite general agreement among most serious Westerners that Iran is close to achieving nuclear capability, preventing this threat has not been on the front burner. This was the case even before the global economic meltdown. With Netanyahu on the world stage, it would be impossible to ignore the issue. Even those who disagree with Netanyahu would be forced to respond to him, meaning the mullahs' nuclear program would finally receive the attention it deserves.

Rhetoric and posturing aside, Obama's early approach to Iran, as noted recently by former State Department official John Bolton, has largely continued along the path paved during Bush's second term. And over the last four years, Iran has moved ever closer to attaining nuclear weapons.

Soft diplomacy, in other words, has not worked.

The Obama administration has maintained the long-held American position toward Iran that no option—meaning a military strike—is off-the-table. This is supposed to be the stick to entice Iran to accept the carrot being offered as incentive to abandon its nuclear ambitions. But correctly or not, the mullahs, at least initially, do not seem afraid that Obama would take military action.

With a Prime Minister Netanyahu, however, Iran would almost certainly believe the prospect of military action is indeed real. To the extent it is even possible, Iran would only walk away from its pursuit if it believed it had no other option.

Should diplomacy fail, the Israeli leader most likely to strike Iran's nuclear facilities would be Netanyahu. Assuming he does—and does so successfully—he would prevent Obama from becoming the president who allowed a nuclear Iran.

While Netanyahu is the leader most likely to use military force against Iran, he is also the one best positioned to make meaningful gains in the direction of peace with the Palestinians. It would not be because of the oft-stated theory that it takes someone from the right to make peace, but rather because Netanyahu is the only figure offering new ideas.

"Netanyahu does believe in the peace process," says Ron Dermer, a senior adviser to the Netanyahu campaign. "What he has said is that the top-down approach has not worked, and he wants to try building Palestinian society from the bottom-up." This would entail finally addressing the indoctrination of Palestinian society in the media and in the textbooks, as well as helping the Palestinians create a better daily life through a stronger economy. And Netanyahu wants a peace process that engages the region by actively involving Jordan and Egypt.

In the decade and a half since the Oslo Accords, it would be hard to argue that the existing paradigm of land-for-peace has worked. If anything, there has been regression away from peace, and the Palestinians have suffered greatly over that time.

What most seem to remember about Netanyahu's first stint as prime minister is his political missteps and domestic political scandals. A dispassionate look at the record, though, shows Israel was hit with just three successful suicide bombing attacks in his three years as prime minister—versus four attacks in the three months before his 1996 election.

Freshly sworn in as president, Obama has made a number of rookie mistakes. He should not add to that list by criticizing the Israeli people for their democratic preferences.

Obama might even come to realize it is the best outcome for which he could have hoped.