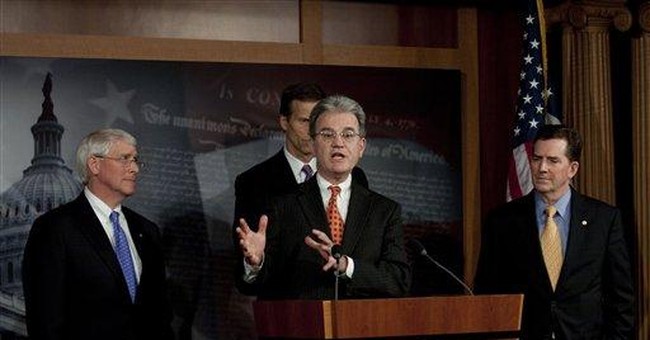 A half-dozen staunchly conservative Members of Congress have been beating around the bush on the anti-earmark ban. They support the GOP’s current ban, but not permanently, and not enthusiastically.

“Congressman Simpson supports the decision of the Republican Conference to ban earmarks for the next two years, but he doesn’t believe that will necessarily result in a more fair, efficient, or cost-effective distribution of federal funding,” said Nikki Watts, the communications director for Rep. Mike Simpson (Iowa).

“...in the absence of earmarks, executive branch agencies will have greater discretion over the distribution of taxpayer dollars,” Watts explained. “Therefore, legislators will inevitably shift their focus from seeking approval by Congress for specific projects to seeking the approval of agencies for specific projects. In short, if the federal government spends any money at all, those decisions will be subjective in nature no matter who makes the final allocation decisions.”

Simpson’s explanation mirrored explanations from Reps. Steve King (Iowa), Michelle Bachmann (Minn.), and Jean Schmidt (Ohio) when questioned about their support for the earmarks ban, in response to a Politico article on Thursday which GOP was taken to task for being two-faced on the issue. Rep. Jack Kingston (Ga.) was also cited in the article as wavering on the ban.

These are some of the most conservative Members in office; Schmidt and Bachmann have received “perfect 100’s” from the American Conservative Union, and King and Kingston both received a score of 80 or above. It took many conservatives by surprise that these legislators, unlike Rep. Jeff Flake (Ariz.) or Sen. Tom Coburn (Okla.), have not wholeheartedly endorsed a universal, permanent earmark ban.

Bruce Pfaff, a spokesman for Rep. Schmidt, said that the Congresswoman firmly supports the current earmark ban but that she had been fine with earmarks in the past and would be fine with them in the future – as long as the earmarks were appropriated properly.

“There have always been criteria… as long as there was never a private interest, and it had to be for a local government,” said Pfaff. “She’s always had a very tight control over what she would ask for.”

Bachmann, one of the most outspokenly conservative members of Congress and a Townhall.com contributor, tried to play off her quasi-support of earmarks by equating her position on earmarks to that of soon-to-be Speaker Boehner’s position.

"I have repeatedly said that I agree with, applaud, and wholeheartedly support Speaker-designate John Boehner's position on earmarks,” said Rep. Bachmann. “Let me be clear, there is no daylight between my position and that of John Boehner. I am opposed to earmarks."

Unfortunately, John Boehner has waffled on his earmarks commitment before enacting the unilateral, outright ban on earmarks in the upcoming Congress. Unlike Bachmann, Boehner has never taken an earmark, but he also hasn’t been firmly opposed to a permanent ban. He used ambiguous language when crafting the earmark moratorium and has repeatedly dodged the issue in media appearances and press releases.

Rep. King tried to use a Constitutional argument.

“The Constitution is clear that Members have the authority to appropriate through the earmark process,” said Rep. King. “There has been no prohibition constitutionally unless they violate the commerce clause or something of that nature.”

King recently called for a “blood oath” from Boehner to shut down the government if the health care bill can’t be repealed. If he is this conservative on Obamacare, then why isn’t he that conservative on the issue of earmarks?

“If we forever signed off of earmarks, then we’re empowering the executive branch to make the exclusive decision to determine where earmarks go,” he explained.

Andrew Moylan at the National Taxpayer Union said that the Members’ response to the prospect of a permanent, unequivocal earmark ban was ridiculous.

“It speaks to the enduring power of earmarks,” said Moylan. “By and large these legislators are voting pretty well, but it’s problematic that they cling to the belief that Congress ought to hand out special projects.”

“It makes no sense that we have Washington deciding what bridges and highways get funded. It’s a problem that we have this large and powerful federal government deciding these issues, instead of the states.”