Open Season on Democrats: Virginia is for Lovers, Not Tom Perriello 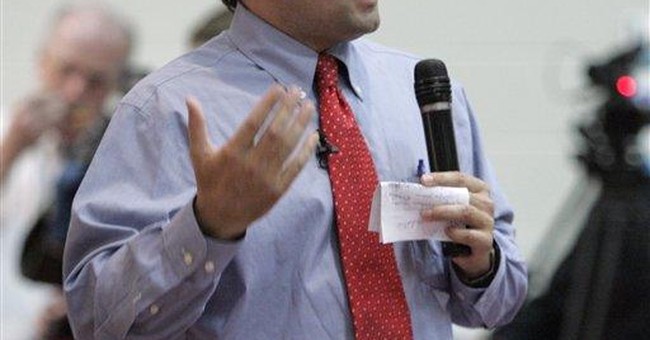 Virginia’s fifth district was home to one of the hottest Congressional races of the year last cycle, and this year promises to be another scorcher. The only differences is that instead of being on the attack, incumbent Democrat Tom Perriello is going to have to defend his seat, including the controversial votes he’s taken in the past year.

Perriello won by a .2% margin in 2008. That’s about 700 votes out of 315,000 cast, enough to where the Federal Election Commission could sneeze on a stack of ballots and blow a few out the window. That sort of margin would lead one to believe that Perriello would fall squarely in the middle in terms of his legislative agenda, but like many vulnerable Democrats this cycle, he has swung far to the left.

He claims that record jives with unique political style, relying on his personality instead of his political know-how. But throwing votes in favor of health care, cap-and-trade, and the stimulus bills might not sound so moderate to his constituents this time around.

"If 50 percent plus one think I am authentic but don't agree with me, I can live with that," he told the Washington Post

The fifth district is a hodgepodge of conflicting views, with Republicans dominating the rural areas and liberal congregating at the population centers. Perriello’s wants to be able to navigate both of those words through personal appeals, sucking in the independents with a moderate political image.

It’s possible that Perriello has realized his voting record might hurt his image now that ballot boxes are back on his radar. Perriello has backpedaled away from the Democrats on finance reform, though final votes on that bill have yet to be counted. The district split 51% for McCain in the 2008 cycle, with 48% of residents pulling the lever for Obama. That compounds the complexity of defending a seat in an anti-incumbant year.

Notably, Perriello has gone to great lengths to connect with 5th district residents, holding one of the most active town hall meeting schedules of any Congressman. Public outreach is a keystone of his political approach and it will probably serve him well through the summer campaign months.

Money is also working hard in his favor. Perriello has $1.4 million in the bank to fund his campaign – a breathtaking sum – and has no primary battle to fight. The closest Republican competitor, Robert Hurt, has $211,000. But Hurt has six primary challengers to contend with, and the National Republican Congressional Committee has declined to endorse a candidate to avoid the appearance of picking favorites.

The favorite is going to be clear on May 18, when the first primary election is held. A runoff, if necessary, will be held on June 8th, before the November general election.