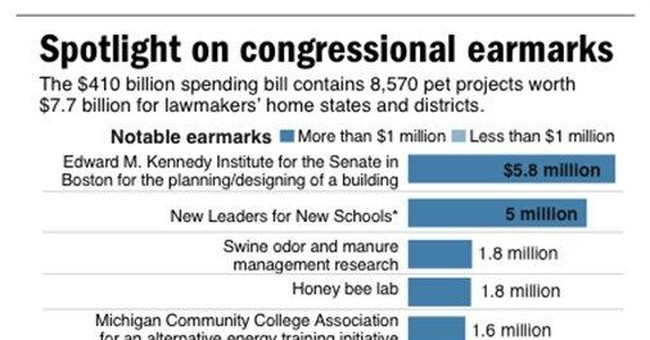 That was certainly the case this week with the earmark war between Republican and Democrats in the House. After Democrats initiated a moratorium on earmarks from for-profit companies, Republicans one-upped them with a ban on all earmarks. That prompted House Speaker Nancy Pelosi to consider upping the Democratic ante as well.

“If [the infighting] helps the momentum in the right direction of getting rid of earmarks, then that is a good fight to have,” said Sandra Fabry, the executive director of the Center for Fiscal Accountability. “Earmarks have become the broken window of the budget.”

Rep. Jeff Flake (R-Ariz.) is the legislator primarily responsible for the Republican moratorium. After pressing for a resolution nearly 5 years ago, the Congressman brought up another initiative just last week after House Democrats instituted the for-profit only earmark ban. Flake’s request for a special session of the House Republican Conference was met with approval by House Minority Leader John Boehner,

“He’s been trying to institute earmark reform since he came into Congress in 2001,” said Matt Specht, a spokesman for Rep. Flake. “I think the House Republicans are serious about doing what it takes to regain the trust of voters, and hopefully win back the majority in November.”

It’s difficult to predict whether House Democrats, or either party in the Senate, will now do another round of tit-for-tat and also move to ban earmarks as well. But Specht said this initial move by House Republicans certainly invites strong political pressure.

“In past years, [Flake] has challenged both Republicans and Democrats on earmarks, and now there won’t be any Republican earmarks to challenge – there will only be Democratic earmarks,” said Specht. “So I think it will be tough for Democrats to move ahead just earmarking for themselves. But we’ll see.”

“I don’t know, this has taken quite a while for it to get to this point,” she said.

Andrew Moylan, director of government affairs at the National Taxpayers Union,said there was a higher likelihood of politicians jumping on board with earmark reform simply because this move had never been made before.

“The chances are a lot better now. Yes, it’s just House Republicans, so in that sense, they’re still a good 370+ members to follow suit for anything to be iron clad,” said Moylan. “But this opens the door.”

There have been whispers that Pelosi might move to install a more widespread ban of earmarks. And one anti-earmark crusader in the Senate is Sen. Jim DeMint, (R-S.C.) who is attempting to push an earmarks ban in the Senate by forcing a vote. That would require 67 Senators.

What was remarkable about the GOP House Conference ban is that it was done by a voice vote. In other words, there was so much unanimous consent that no hand-counting was needed. That means that Congressmen like Jerry Lewis (R-Calif.), who has typically been opposed to earmark reform, weren’t skipping out on the chance to reform.

Perhaps someone told him it was an election year.