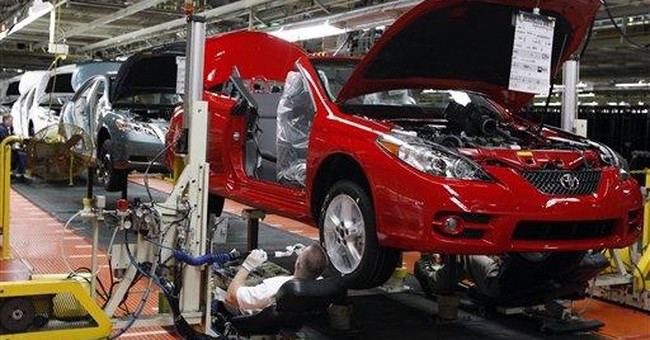 New claims that President George W. Bush’s administration is responsible for the Toyota recall takes "blame Bush" rhetoric from an energizing pastime to a blood sport.

Bush critics may have sharpened their knives a little too quickly this time around.

ABC recently looked into a 2004 investigation conducted by National Highway Traffic Safety Administration (NHTSA) officials, which addressed safety concerns about rapid acceleration in Toyota vehicles. At that time, of course, NHTSA was overseen by Bush appointees.

Those officials had decided to exclude 26 of the 37 reported incidents of rapid acceleration from their examination because those incidents were of a "longer duration," and a "defect trend" in Toyota's manufacturing couldn't be identified among them.

No facts have emerged about the precise reason that NHTSA officials couldn't identify a defect trend in 2004. One report alleges that longer duration incidents were caused by a driver mistakenly pressing the wrong pedal; in other words, the longer incidents might have been the driver's fault, so a defect trend in manufacturing simply didn't exist.

“It's fair to rule out that [NHTSA] is confused by the problem, when they’ve been looking at sudden acceleration issues for many years,” said the official. “They even have an acronym for them – SAI (Sudden Acceleration Incidents). They’re nothing new.”

ABC alleges that NHTSA and Toyota officials knew about the problems and intentionally overlooked them to avoid fallout. That is certainly one scenario, and not at all impossible given the questionable relationships of big corporations and Uncle Sam.

But the former NHTSA official said that the nature of the agency doesn’t lend itself to that kind of cronyism. If such cronyism existed, many other safety concerns would be overlooked, and far more safety recalls would occur. But that’s not in NHTSA or the car companies’ best interest.

“If the question is, does anyone in the agency give a pass because a former friend or colleague works there, the answer is no,” said the official. “They'd have to give a pass to the entire industry.”

Then there’s the November 2009 petition to re-open acceleration investigations that was denied by Obama NHTSA officials. That means Obama's NHTSA had been dealing with the issue precisely the way it had been dealt with in the past.

But ABC’s report pinned the blame on Bush's NHSTA, citing undisclosed "internal government memos” to back up their case.

"Internal government memos and court testimony analyzed by ABC News show the federal investigations were extremely limited in scope, after negotiations involving former safety investigators who had been recruited to work for Toyota's Washington, D.C. office," wrote a trio of ABC reporters.

But this point there is no available evidence that Tinto or Santucci manipulated investigations, nor that they did anything different than what thousands of government employees do with every change in administration – transition into the private sector. Recent officials are the best source of current information on the complex regulations concocted by Uncle Sam, and many government workers take their jobs in hope of eventually receiving a private-industry paycheck. Furthermore, Santucci has testified that he had nothing to do with safety regulations when serving at NHTSA under President Bush.

The only thing that's certain at this point is that ABC and their “unnamed sources” are eager to pass the buck.