After Scott Brown, It’s Not Easy Being Blanche 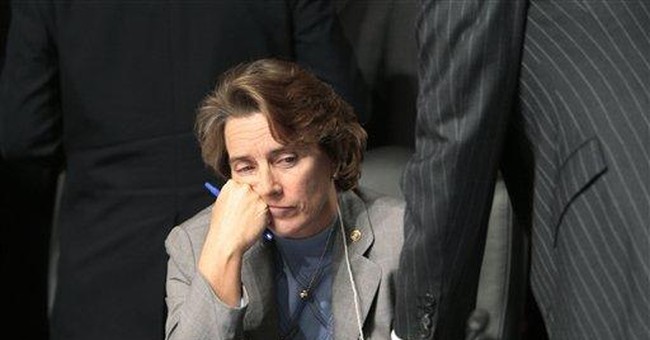 Being a centrist Democrat in Congress these days is awfully hard. Especially if you’re Blanche Lincoln.

Lincoln has been fighting off rumors that she’s dropping out of the Arkansas Senate race, a key Republican battleground in the November mid-term elections. The state has elected a Republican to the Senate only once this century, but political analysts say the GOP has a real chance of pulling another Scott Brown this time around.

Why? Lincoln is polling steadily behind no less than four Republican challengers – with state Sen. Gilbert Baker leading Baker by a whopping twelve percentage points according to the latest Rasmussen poll. She trails both Safe Foods Corporation CEO Curtis Coleman and Waco Manufacturing CEO and tea party activist Tom Cox by ten points. Some have disputed these figures, saying polls show nothing more than her trailing opponents within a margin of error.

Still, there are no polls that show she’s ahead, creating a mood that seems to say “anyone but Blanche.” Most attribute that mood an economy which stubbornly refuses to rebound, and Lincoln’s vote for unpopular TARP bailouts. She cast another controversial vote in favor of health care reform, angering independents, who make up a full third of Arkansas voters. But then she came out against the public option, which didn’t do her any favor with liberals.

“Given the bent of Independent voters (in the recent Massachusetts special election but also in national surveys), we are increasingly doubtful that the Arkansas Democratic Senator can win another term,” writes analyst Stu Rothenberg. “Of course, much depends on the eventual GOP challenger and how the economy behaves over the next nine months.”

On Tuesday, Lincoln called rumors that she would “outlandish,” shortly after announcing that she had a massive $5 million in her campaign coffers – an impressive amount even for an incumbent. That stacks up nicely against her Republican challengers: only Gilbert Baker has more than $100,000 on hand, showing $510,000 at the time of his last FEC filing in September.

But that hasn’t deterred Republican challengers, with Rep. John Boozman (R) announcing that he is considering a bid shortly after Lincoln’s $5 million announcement.

Lincoln’s political problems have been complicated by her mix of conservative and liberal votes, which are hard to reconcile with an indecisive constituency. In addition to her mixed-up health care votes, she was against Employee Free Choice Act, and against bringing Gitmo prisoners into the U.S. for a trial.

She recently did another two-step on health care by coming out as one of the only Senators to openly oppose reconciliation, the “nuclear option,” as a means for passing the bill.