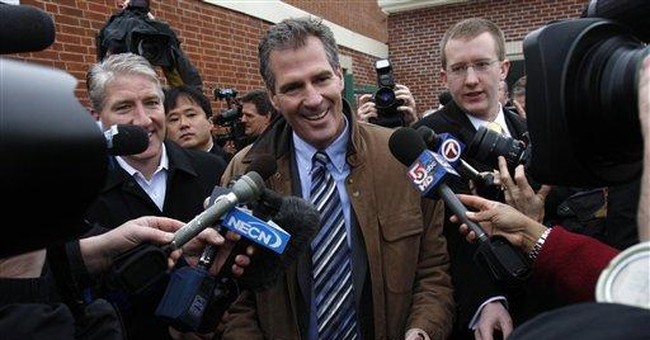 Brown outperformed analysts expectations and took unexpected leads in areas such as Dartmouth, Massachusetts, where Brown was projected to need 49 percent of the vote to win, but got 53 percent. Sixty-three percent of the heavily liberal Boston area swung for Coakley — an astonishingly low margin.

"You can't underscore how big a victory this is," said Mitt Romney, speaking on Fox News.

It was the first time a Republican has been elected to the United States Congress in Massachusetts since 1973. The victory came despite President Obama’s eleventh-hour appeal, massive funding from liberal interest groups, and frantic appeals from Washington Democrats. The Republican effort simply overwhelmed what many saw to be an untouchable Democratic seat.

"[Brown] has done it by sticking to the issues and not running a negative campaign," said Romney. "Its a referendum on the Obama agenda.... [Obama] has delivered something very different than what he promised."

The big question is what Democrats will do on the health care issue, given that the election has shifted the balance of the Senate from an untouchable 60-vote majority to a 59-vote majority.

House Leader Steny Hoyer has indicated that he will proceed with health care despite the Republican victory, which wrecks the Senate supermajority. Hoyer might have a little time to work with; early reports say that a certification of the results could happen no sooner than January 29. That’s because federal law allows for ten days to pass before states officiate the results, so that absentee and military ballots can be received. Then, five days are given for the governor to certify the results.

Certification could be delayed past February; the Senate retains the ultimate authority to decide how to certify its Members, and they could potentially employ some tricks to stop things up.

If they allow the certification to proceed, a vote in February could mean a couple of things. The Senate bill has been passed, and doesn’t need to be reconciled with the House. But that means the House must expedite it’s passage of the Senate bill before Brown is installed.

That will probably mean that unions don’t get their sweetheart exemption from the tax on Cadillac insurance plans; it could mean the way the health care is paid for is still in limbo; and, it probably means that abortion will be funded in some way by the federal government.

Another option exists for Democrats: the nuclear option. They could attempt to pass the bill via reconciliation, by ruling that only a simple majority (50 Senators) instead of a supermajority (60) are needed. This move is widely unpopular.

Many pundits view the defeat as a condemnation of Obama’s policy agenda, reflecting widespread public disapproval of his health care plan. It will significantly alter the Democrats political approach as they head into the main 2010 mid-term elections.