Conservative Women Concerned About More than Just a Tiger 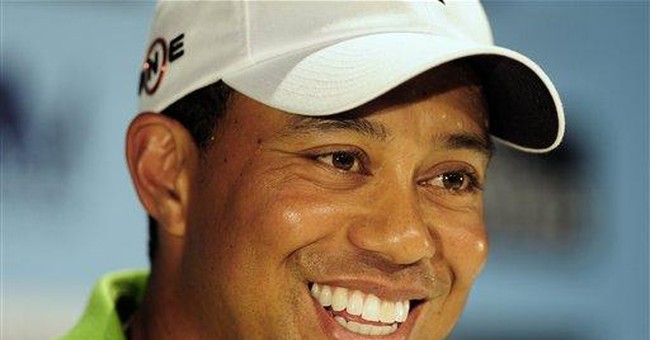 Tiger Woods’ extramarital affairs have sparked discussion about his future as a golfer, his endorsement deals, and extensive dissection of the bodily attributes of the women he cheated with. What seems to have been left by the wayside are the moral issues of adultery, and the emotional cost to his family.

Eugene Robinson of the Washington Post said the “most interesting” part of the story is that “Woods appears to have bought into an ‘official’ standard of beauty that is so conventional as to be almost oppressive.”

In other words, his choice of white women with mostly blond hair is more interesting than the effects of numerous extramarital affairs on his wife or the effects of a possible divorce on his children.

The Huffington Post has provided feature-by-feature analysis of his sexual liaisons, without a single piece on the detrimental affects of having a cultural icon stand sink into an ethical morass. Similar things can be said for the The Wall Street Journal, New York Daily News, and Los Angeles Times, which have focused in on his business deals, lovers’ accounts, and even how the quickly-spreading news of the affair paved the way for breakthroughs in technology.

“Among all the buzzwords describing the ‘light speed’ and ‘real-time’ nature of technology these days, few events are driving home the point better than the Tiger Woods affair, a veritable hole in one for the Internet's quick turnaround time,” wrote the Times.

Technology wasn’t exactly the first thing that came to mind for conservative women, like Alyssa Cordova, a spokeswoman for the Claire Booth Luce Policy Institute.

“Thank God their children aren’t old enough to totally understand all of this,” said Cordova. “I’m just disgusted with the complete disregard Woods has for his family.”

Wendy Wright, the President of Concerned Women for America, said she thought the mainstream reaction to the Woods ordeal most accurately reflected the types of attitudes that should be expected out of news like this.

“Americans recognize how personally damaging it can be to not only the couple, but to the children, extended family, the society, and anyone who is associated with them,” said Wright. “I'm encouraged by the fact that people are disappointed. That his actions are unacceptable,”

“In our culture, we're just bombarded with the messages like that of his Nike sponsor: ‘just do it.’ And our culture recognizes that kind of licentious lifestyle is visibly harmful.”