On Short Notice, Conservatives Turn Out Against Obamacare 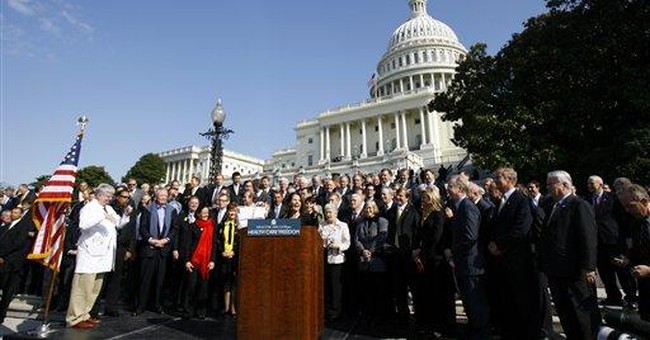 In less than a week, Rep. Michele Bachmann (R-Minn.) managed to round up thousands of conservative protesters on the front lawn of the Capitol after simply inviting them there on national television. On Thursday, they came en masse, waving signs, yelling chants, and… getting arrested.

Twelve protesters who went to Speaker Nancy Pelosi’s office were cuffed by Capitol Hill cops and charged with unlawful entry inside of her office, unlawful conduct in the hallway outside, and disorderly conduct outside of the room. They, and a crowd of other protesters, had torn up her 2,000-page health care bill and left it in tatters outside the Speaker’s office.

There was also an alleged incident of a Democratic Congressional staffer getting physical with a protester inside Virginia Rep. Gerry Connelly’s office. The staffer, communications director George Burke, adamantly denies any altercation took place. But Smart Girl Politics Executive Director Teri Cristoph says Burke shoved her body and pushed her video camera down after she tried to tape his office refusing to give her an answer on whether Connelly supported Pelosi’s bill.

Despite these incidents, the protest itself was calm and well-attended. Somewhere between three and five thousand individuals showed up, and over a dozen Members spoke in 30-second increments. Mary Fallon (R-Okla.) said the crowd inspired her work fighting the new legislation.

“I can’t tell you how good it feels to stand up here and see everybody today,” she said.

Rep. Joe Barton was a bit of a ringleader, taking over the mike and working the crowd up into a frenzy.

“There’s a sign over here that says you can’t beat stupid. That’s true, but you can vote it down,” he said.

One participant, Barry Mussell, had driven eleven hours overnight from McDonnell, Georgia to stand in front of the capitol and get his voice heard.

“Under Obamacare, the government is going to decide whether I'm worth that or not,” he said. “If they're not, then they're going to say, 'Well, we're not going to pay for it.'"

And of course, there were the counter-protesters. Tye Berry from Los Angeles California was part of the Code Pink movement, and was complaining about the weakness of the bill.

Pelosi is rumored to ask for a vote on the bill as early as Saturday.