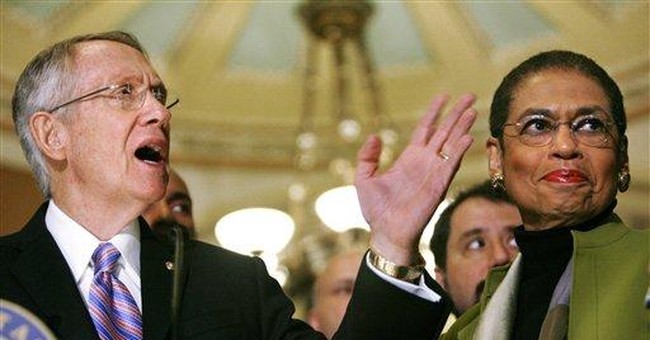 A procedure known as "reconciliation" has previously been used to push budget legislation through the Senate with a majority — not supermajority — vote. But in advocating for the procedure to be used on cap-and-trade legislation and health care instead of just budget bills, Democrats are throwing out any semblance of bipartisanship and thumbing their noses at the checks-and-balances system that is the crown jewel of the American system.

Senate Majority Leader Harry M. Reid (D-Nev.) told the Washington Post: "I don't know why everybody's up in arms" about reconciliation, and Sen. Barbara Boxer (D-Calif.) asked why opponents were "so afraid" of it, because "reconciliation is a rule allowed by the Senate."

That's true; however, the entire focus of reconciliation is how it is used, not the fact that it is used in the first place. Budget bills are notoriously difficult beasts, and squabbles over the details are inevitable. Budget bills are also incredibly important, keeping the government running and adjusting what is spent to accommodate new circumstances.

When budget bills don't get passed — as in 1998, 2002, 2004, 2006 — Congress keeps spending money at the same rate it did the year before, which may or may not reflect current needs. Not passing a spending also violates the Congressional Budget Act, which requires that a budget be put into place each year.

It's important to keep in mind how difficult it is for the majority party in Congress to reconcile its differences with the minority when it comes to finances, given the differences between conservative and liberal opinions on the scope of government. But it's the pinnacle of partisan stubbornness and government waste when budget bills don't make it through.

Reconciliation allows budget bills to get past stubborn minorities. When the procedure was legislated in 1984, Sen. Robert Byrd, (D-W.Va.) put specifications around exactly which issues could be subject to it — all related to finances. Reconciliation can only be used for adjustments in spending, the debt limit, or taxes.

In this Congress, Senate Republicans are not budging on the issue of the Democratic health care plan. They're also holding their ground on climate change legislation. Since Democrats are two votes short of a supermajority in the Senate, Democrats must reach across the aisle to work with them — at least, for now.

The current House budget bill contains legislation that would apply reconciliation to the issues of cap-and-trade and health care. The Senate budget bill has no such provision, but when the House and Senate bills are combined for final passage, the Senate will negotiate the final version in a Committee meeting, behind closed doors. Senate Democrats have expressed openness to including reconciliation in the bill, meaning that the possibility of including the measure is real. There's no way for the minority to fight it.

Eight Senate Democrats signed a letter opposing the use of reconciliation for policy issues in addition to financial issues. From Senator Kent Conrad, (D-Neb.): “I have said publicly and privately what I believe. I don't believe reconciliation was ever intended for the purpose of writing this kind of substantive reform legislation such as health care reform, such as climate change.”

Sen. Byrd, one of the authors of the reconciliation amendment, told the Post: "I am certain that putting health-care reform and climate change legislation on a freight train through Congress is an outrage that must be resisted.”

Brian Darling, director of Senate relations at the Heritage Foundation, speculates that Congress may have reached a "breaking point" where reconciliation is viewed as simply another parliamentary procedure.

But that's not the way it should be. The point of the American system is that not everyone agrees on policy, including cap-and-trade and health care. What is vitally important to some may not be vitally important to all, and the Senate supermajority ensures that enough people are in agreement for a proposal to become public law.

Eliminating this supermajority when such crucial legislation as climate change and cap-and-trade are at stake is worse than a simply cheap shot by the majority party. It's worse than changing the rules after the game has already begun.

Eliminating the supermajority is tyranny of the majority in the worst way. It makes a mockery of the way legislation is debated and voted upon in a Democratic society, and is a threat to the system of governance that has made America the leader of the free world.