The Pro-Life Position Is the Pro-Woman Position

Jerry Newcombe
|
Posted: Jan 26, 2017 12:01 AM
Share   Tweet
The opinions expressed by columnists are their own and do not necessarily represent the views of Townhall.com. 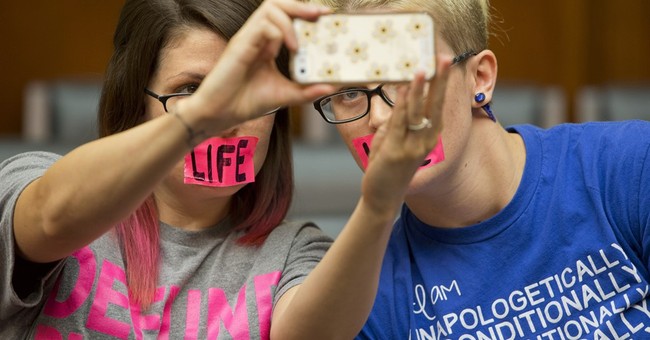 Hundreds of thousands of women descended on Washington, DC and many major cities around the country the day after President Trump’s inauguration, to voice their displeasure with the new administration. That didn’t take long.

But only those who are committed to abortion rights were allowed to participate. It has been widely reported that even feminist groups holding pro-life convictions, such as New Wave Feminists, were kicked out of the Women’s March.

Thus, feminism today is marked only by those radically committed to abortion no matter what. Considering that abortion targets unborn women for death, it is ironic that those trying to defend those lives are excluded. The only women welcome at this “Women’s March” are those committed to the destruction of the unborn. So much for inclusion. So much for what headliner Madonna called on Saturday’s march, “a revolution of love.” The love extends only so far.

The march happened on the eve of the 44th anniversary of Roe v. Wade, the landmark Supreme Court abortion ruling.

Abby Johnson, former abortion clinic manager, was not welcome at the march when it was learned she is now pro-life.

Micaiah Bilger of lifenews.com wrote (1/19/17),  “the march organizers kicked out Abby Johnson’s organization And Then There Were None, an outreach to abortion clinic workers who want to leave the industry. ‘They’ve always said everybody’s invited, this is an inclusive march, but now, what they’re doing to pro-life groups by kicking us out is basically saying it’s not inclusive, its exclusive just to pro-choice organizations,’ Johnson said.”

Abby Johnson is a fascinating example of a change of heart over the abortion issue. I’ve had the privilege of interviewing her for my radio program Vocal Point.

But one day she witnessed a live ultrasound-guided abortion. She saw a 13-week old baby fight and struggle for his life, only to lose it.

She told me of that incident, "I realized then there was humanity in the womb, that there was life there, and if that was true, then it needed to be defended. And I also recognized at that time that not only had I been lied to [about the unborn], but because I had so eagerly believed those lies, I had lied to thousands of other women, who had come into our facility. So I knew I had to leave. So I did."

She also said that for the eight years she worked for Planned Parenthood, there had been Christians outside the clinic---peacefully praying to end abortion and offering loving alternatives. So after her change of heart, she sought help from them. And they helped her find a new job and above all helped her in the process of finding forgiveness and new life in Christ.

Abby Johnson has written the books, Unplanned (with Cindy Lambert, 2010) and The Walls Are Talking: Former Abortion Clinic Workers Tell Their Stories (with Kristin Detrow, 2016).

The first book tells her amazing conversion story, from pro-abortion Planned Parenthood model employee to loving pro-life advocate. The second book features not only her experience inside such a facility but also that of other former employees of the abortion industry. She's calling for healing in Christ, not only for those who have had abortions but also for people like her, who used to work in that field.

In The Walls Are Talking, Johnson quotes Aldous Huxley, “The propagandist’s purpose is to make one set of people forget that the other set of people are human.” And so, she describes the unborn baby as “an innocent human---a life easily marginalized and depicted solely as a burden.”

She adds, “To this day I continually grapple with guilt, shame, and the heaviness of regret. I am passionate about sharing my story and doggedly determined to educate people about the reality of abortion….I pray that babies will be saved, women will be deterred from making such a hopeless choice, and men will encourage and support their partners to choose life.”

Abby Johnson’s testimony shows that the really pro-woman position is that which affirms, not denies and destroys, life---including that of the unborn. This former employee of the year was only good for Planned Parenthood as long as she promoted their unfettered commitment to killing the pre-born. What a tragedy that instead of celebrating life, the Women’s March essentially celebrated death.