Is Evolution Just a Shell Game? 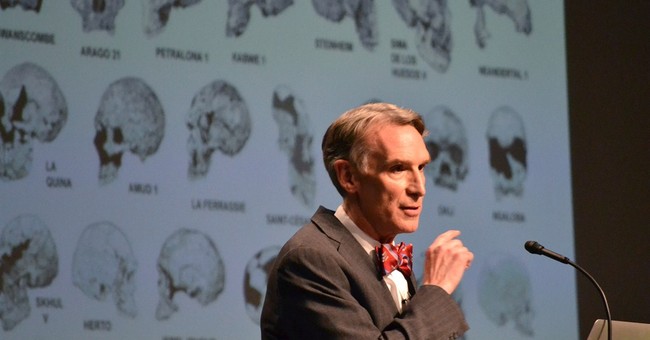 As the school year begins to gear up again, it’s a given that in classrooms across the country, evolution will be taught virtually everywhere and virtually always as a proven fact.

When I was in college, at Tulane in the 1970s, I didn’t understand how to reconcile evolution and the Bible. I was taking anthropology classes and learning details on the theory of how we all supposedly came from common ancestry.

Then I spoke with a Christian medical school professor who explained that there is abundant evidence for microevolution---small changes within kind. It’s an established fact within biology that nobody disagrees with. But the controversy, he said, surrounds macroevolution, big changes beyond kind. And the evidence for that is not there. The missing links are still missing.

Macroevolution, i.e., common ancestry, is summed up well by its critic Rabbi Daniel Lapin when he told me once: “By an unaided materialistic process, over a long period of time, primitive protoplasm evolved into Bach and Beethoven.”

Up until his death about a decade ago, the leading evolutionist in America was Dr. Stephen Jay Gould of Harvard University.

Gould admitted: “Everybody knows the fossil record doesn’t provide much evidence for gradualism [i.e., tiny, successive changes over time leading to major changes, including speciation]; it is full of gaps and discontinuities. These gaps are all attributed to the notorious imperfection of the record, but this is not an adequate explanation. The fossil record shows one thing which cannot be attributed to its imperfection; most species don’t change.”

Gould said elsewhere, “New species almost always appeared suddenly in the fossil record with no intermediate link to ancestors in older rocks of the same region.”

So then, did Gould abandon belief in macroevolution in light of all this? No, he said, “evolution, like gravitation, is a fact.”

In 1972, Gould and Niles Eldredge published a new theory called Punctuated Equilibrium, which attempted to explain the existing geological record in evolutionary terms. A geologist friend of mine says, “Their theory proposed that most species exhibited little net evolutionary change over their geologic history, and that changes came through---restricted to rare and rapid events of branching speciation.”

In other words, Gould recognized that the record does not show small, gradual changes from species to species over huge amounts of time. Species appear suddenly in the fossil record, rather than through gradual transition.

The late Dr. Colin Patterson of the British Museum was a renowned evolutionist, who spoke at the American Museum of Natural History in New York City (11/5/81): "Gould and the American Museum people are hard to contradict when they say there are no transitional fossils…I will lay it on the line—there is not one such fossil for which one could make a watertight argument."

Creationist Luther Sunderland wrote a letter to Dr. Patterson, and the latter wrote him back. In his book Darwin’s Enigma, Sunderland reproduces the letter which said: “So, much as I should like to oblige you by jumping to the defense of gradualism, and fleshing out the transitions between the major types of animals and plants, I find myself a bit short of the intellectual justification necessary for the job.”

Patterson, author of the textbook, Evolution, also said in that letter: “I fully agree with your comments on the lack of direct illustration of evolutionary transitions in my book. If I knew of any, fossil or living, I would certainly have included them.”

On December 15, 1987, I called Dr. Patterson in London from our office in Ft. Lauderdale and got to speak with him for several minutes.

He verified the authenticity of his letter to Sunderland. “Great,” I said, then I explained how I was working on a film (final name: “The Case for Creation,” hosted by the late D. James Kennedy---a type of Scopes Trial in reverse) and asked if we could possibly interview him for this program. He strongly declined to participate because he didn’t agree with our premise.

He told me on the phone that despite the lack of evidence for evolution, he nonetheless still believed in evolution.

Indeed, it often appears that macroevolution is a predetermined conclusion in search of proof. If there’s no creator God, something like evolution has to be true. One has to wonders if that’s why so many tenaciously hold to it despite the lack of evidence.