Refugee Resettlement Too Much of a Burden for America

Jeremiah Cuevas
|
Posted: Aug 02, 2016 12:01 AM
Share   Tweet
The opinions expressed by columnists are their own and do not necessarily represent the views of Townhall.com. 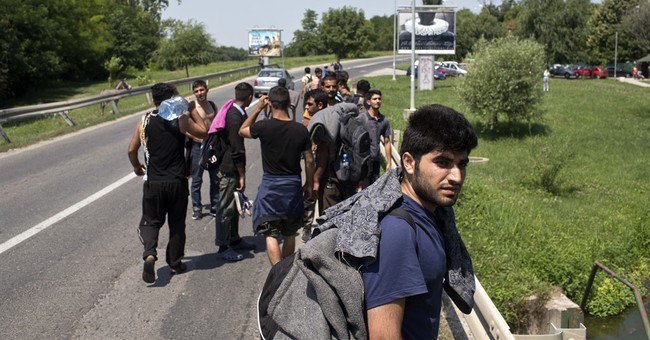 At the close of 2015, the Obama White House famously worked a refugee resettlement program into the massive "Omnibus" bill. The Administration initially promised to admit 10,000 Syrian refugees into America in 2016. Democratic nominee Hillary Clinton pledges to expand refugee resettlement. With no way to vet the people seeking refuge from the Syria and the surrounding region as of yet, is this open door policy good for the American people?

According to the Refugee Processing Center, since the beginning of 2016 America has taken in over 6,268 refugees from Syria, currently with no real process to vet them. The Administration is ignoring the fact that ISIS vowed to hide terrorists within those refugees. Of these refugees, 464 are males between the ages of 20 and 40. So far Democrats have attempted to obfuscate the threat of radical Islamic terror by asserting that it is a gun control issue.

To spite the media silence our government has been admitting thousands of refugees every month. In June the State Department allowed 2390 refugees into the United States; last month another 2325. We can only guess how many more will be allowed into the country this month. The sovereignty of America hangs in the balance. After all, if we just let people into our country with little or no scrutiny, do we really have a country?

Retrospectively, incidences like San Bernardino and Orlando cause us to take notice that terrorism is a very real threat within our borders. A threat aided by our overly politically correct culture. Non-terrorist Muslim refugees may also pose an equally dangerous yet more dynamic threat to America.

Sweden has taken around 80,000 refugees in, more than any other European Nation in relation to its population. This massive influx of refugees leaves Swedes in danger of losing their country. With over 319 million people living in the United States, it would be unlikely America suffers the same fate on a national level. However, what if a large concentration of Muslim refugees found themselves in small town America? What does this mean for local infrastructure?

We have already seen changes to many local institutions. In states like Tennessee, Georgia, and California, public elementary school students are being taught Islamic religious practices. To make Muslim girls feel more comfortable, a school in California is asking that non-Muslim girls wear hijabs. The American Center for Law and Justice (ACLJ) is currently fighting against these movements. However, conflicts like these will only escalate as our leadership continues to admit refugees from the region.

The chronic misuse of the buzz word "xenophobia" by the left also adds to this problem. The word phobia speaks to an exaggerated, inexplicable and illogical fear of something. When it comes to radical Islamic terrorism, there is an actual threat that looms over us, one that has taken Americans lives.

The criticism that it is anti-American to turn away those seeking asylum would be true if there were a way to vet these refugees. The primary duty of the federal government is to keep us safe; our foreign policies need to reflect that. Syrian refugees aside, we should not let anyone into this country at the expense of the safety and security of the people already living here. Putting Americans first is not xenophobia, it is the primary duty of our federal government.

In the wake of the bombing of the Istanbul Atatürk Airport last month, Secretary of State John Kerry said ISIS was “desperate.” With 41 killed and 27 wounded, our leadership thinks that the enemy is on the ropes? The statement is worse than Obama’s famous 2014 "JV team" evaluation of ISIS. There have been eight terrorist attacks killing 89 Americans since Obama took office, and no real action from our side.

For the past eight years, this administration has had the full might of the most powerful military in the world. Under any other leadership, the remnants of ISIS training camps would be little more than sheets of glass in the Middle Eastern desert. Under Democratic leadership, who looks like the JV team?

After President Carter, Ronald Reagan brought might back to the United States military. Our enemies had a healthy respect for us. We were the shining city on the hill. The then-Soviet Union saw us as equals. In stark contrast, Putin now laughs at us and has no respect for this president or our country. Thanks to Obama's Iran Deal, Iran, the leading financier of Islamic terrorism, has a similar view of the United States. We need strong leadership to bring the fight to the enemy. One that will put our soldiers in a position to win.

Domestically, we have a Constitution that affords us as Americans the right to act. In other countries, they are not empowered to raise up and fight against their enemies. What would happen if every time a would-be terrorist tried to shoot a mass of people and found themselves in a room full of guns pointed back at them? Under the proper leadership, America possesses the rare ability to couple a robust individual right to self-defense, with the strongest and most advanced military on the planet.