Shopping for the Next President

Jeremiah Cuevas
|
Posted: Feb 17, 2016 12:01 AM
Share   Tweet
The opinions expressed by columnists are their own and do not necessarily represent the views of Townhall.com. 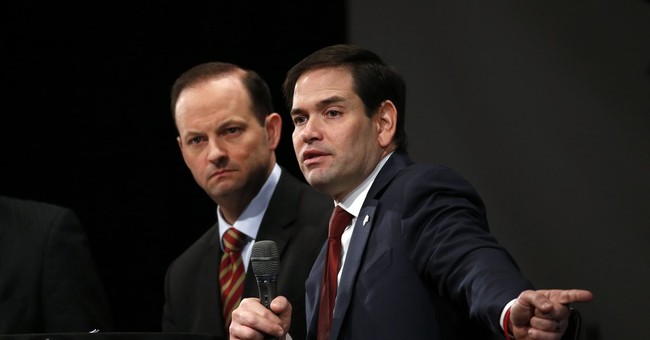 A dollar doesn’t go as far as it use to. Nowadays when people go to buy groceries they want to know that they are getting their money’s worth. This election cycle when Americans go to the polls, they are going to get themselves a brand new president. Depending on who they elect they could pay as much as $19 trillion. The huge question ringing out should be, are they going get what they pay for?

While running for the office of President the candidates make huge promises, but can they make good on them? Barack Obama was no different. He promised us “Hope and change.” He did manage to change one thing. Since he took office in 2008 the national debt has climbed from $10 trillion on George W. Bush’s last day in office, to the current level of over $18 trillion.

Hillary Clinton has vowed to build on what the Obama administration started. This includes, Obama’s wildly unpopular healthcare solution Obamacare, which will cost the American people $200 trillion dollars over the next decade according to the Congressional Budget office.

Hillary has also came forward and stated her plan to improve infrastructure would cost the American taxpayer $275 million dollars. Late this past summer, Clinton vowed to bring down the price of College; which would also reduce the amount of college debt. This plan will cost taxpayers another $350 billion. These numbers come from her camp so the American people could be on the hook for much higher numbers. Add just these aspects of her platform alone and the former Secretary of State becomes distastefully expensive.

Bernie Sanders has perhaps the most expensive platform on the campaign trail. His plan for free state college tuition is perhaps the most notorious aspect of the candidate’s platform. It promises to cost $70 billion over the next decade, and he promises to make Wall Street pay for it. Well how does he do it?

Brian Brenberg associate professor of economics at King’s College told Fox news that Wall Street bankrolling this plan isn’t entirely true. Sanders proposes that the finances for the free college plan will come from a tax on stocks, bonds and mutual funds. Wall Street is not the only demographic that purchases mutual funds, stocks and bonds. This investment tax threatens many middle class Americans who lack the wealth to diversify, that many of the wall street elite have. According to the Wall Street Journal Sanders’ platform as a whole will leave the Americans on the hook for $19 trillion.

Undoubtedly, government spending is not confined to one side of the aisle. The candidates on the right come with a price tag as well. Although Donald Trump the current GOP front runner is very vocal about his will to “Make America great again.” How much does that cost?

There are few issues that presidential candidate Donald Trump is more vocal on than building a wall on the Mexican border. Trump has said time and time again that he would make Mexico pay for that wall. Mexican President Enrique Peña Nieto has told the people of Mexico that he will not pay it.

There is currently 651 miles of fencing on the border, most of which is single layer fencing. The Washington Office of Latin America has estimates the cost of finishing the fence over $4 billion. To build a full scale wall that spans "the entire 1,900+ miles of the U.S.-Mexico border would cost taxpayers hundreds of billions of dollars."Of course Trump like most of the candidates across the GOP field have a similar stance and rightfully so, without a border you don’t have a country.

Recently,Ted Cruz has been getting criticism for his plan for a controversial business flat tax. Many are calling it a value added tax or VAT. Opponents are saying that the tax could be easily manipulated by a successor; effectively, it could be used as a vise on business revenue, as is the case in European nations. Another concern is a perceived loss of tax revenue by as much as $3.6 trillion over the next ten years according to the Tax Foundation. The loss could be mitigated by more available capital being available investment and an job growth of 4.9 million that could ensue as result of the plan.

Marco Rubio has been trading punches with Ted Cruz on many issues including his apparent weakness on immigration. Besides immigration reform a major chink in Marco Rubio’s armor would have to be the $6 trillion deficit it creates. Hoping to capitalize on many of the same tax practices that have been on the docket for Republicans since before the Bush years. The biggest difference being expanding earned income credit by $2,500 for working class families American families.

Rubio explained his family centric tax reform in the last South Carolina debate saying, that he was not giving anyone anything. He simply stated “It’s their money.” The tax credit would not be available to those families earning $300,000 to $400,000 annually. This plan gives many huge tax breaks to middle class and upper middle class families. However, all these tax breaks create a large deficit.

According to Gallup poll the number one issue facing the American voter in 2016 is by far our economy. The people of this country are at a place where they stand to lose their way of life. What kind of country are American children going to inherit? Today we take greater consideration and careful thought to where each dollar goes. Shouldn’t we extend at least that same of degree consideration, as to how we choose a president that will be spending our tax dollars?