Jeremiah Cuevas
|
Posted: Jan 01, 2016 12:01 AM
Share   Tweet
The opinions expressed by columnists are their own and do not necessarily represent the views of Townhall.com. 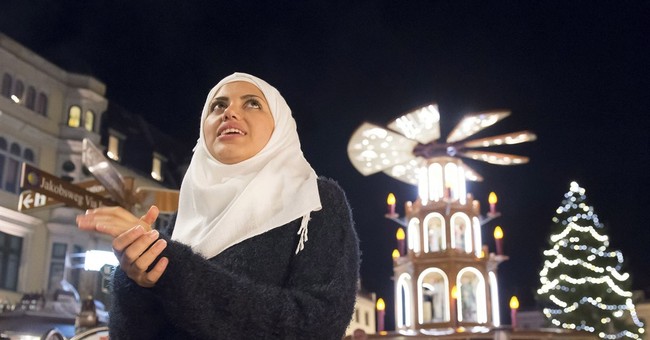 The last few weeks we have heard over and over again "America needs to take the lead" in this so-called refugee crisis. In fact, right before the president and the rest of Capitol Hill went on Christmas break, those in power made sure to wrap a deplorable omnibus bill, and put it under the tree for the American people. Many issues counter to the will of the Americans found their way into this mammoth piece of legislation. Perhaps the most heinous of these measures in this sweeping ode to the Obama administration, is the full funding of the controversial Refugee Resettlement Program that an estimated 54 percent of American's are against.

Like the Roman Empire that fell because of over expansion, and in large part the misuse of government authority, America, a once proud society, is now collapsing under the weight of many of the same forces. Many believe that America has a responsibility to the rest of the world to save other countries from themselves; that America should have no borders; that we should simply let everyone in even at the risk of the security and sovereignty of the United States itself. If a politician comes forward saying anything less than that, they are labeled an isolationist.

Combining the funding of Obama's refugee plan and current immigration practices by the United States government, we can expect to begin to see a change in what it means to be an American. Averaging over the last 46 years, the United States government takes in about 1 million people from impoverished countries every year. The number increases with each new piece of legislation passed by congress to broaden it, often without the knowledge of the American people.

What happens when we take people from dangerous or impoverished nations into the United States? Does this do anything to help the countries that the people originally emigrated from? According to the World Bank there are 5.6 billion impoverished people in countries all over the world. When people come to participate in American to improve their lives the overwhelming majority do not go back to the countries they came from. Instead they remain here in America improving their own quality of life. How does this benefit the people they left behind in their homeland?

If current legal and illegal immigration levels, and current birth and mortality rates continue, by 2020 the population of America will be over 340 million people. That is a growth of over 20 million people in less than 4 years, if congress continues to make the same increases on immigration policy that it has since 1970. That kind of population growth would be unsustainable for any country, even one with a thriving economy.

The practice of healthy immigration when properly maintained, is good for America. However, according to the Bureau of Labor Statistics, over 15 million Americans are unemployed. States such as New York, report unemployment rates as high as 10 percent. Our economy is anything but thriving.

The refugee resettlement plan promises to bring as many as 100,000 refugees beyond current immigration trends. It has become common knowledge that ISIS has promised to send in more radical jihadists; taking full advantage of the naivete of the apparent majority of the American leadership. Leadership, that is evidently too afraid to stand up to the Obama Administration on behalf of the American people.

The United States Citizenship and Immigration Services (USCIS) attempts to assure us that refugees seeking asylum in the United States may remain for a period not exceeding 15 months. However, the fact that there are currently approximately 11 million people in our country illegally with expired work visas garners little comfort that these limitations will be enforced.

The truth of the matter is America should have a healthy path to citizenship for those wanting to improve their lives and test their metal here in the United States. We should on occasion allow people to seek shelter from persecution, when it is not safe in their homelands. We cannot however, let these people in at the expense of the security and the sovereignty of the United States of America. To spite the concerns of many conservatives in congress, and over half the American people; the Refugee Resettlement Plan is presently moving forward. Obama has again strong armed government to push a personal agenda.