Jeffrey Rogers
|
Posted: Nov 11, 2019 1:15 PM
Share   Tweet
The opinions expressed by columnists are their own and do not necessarily represent the views of Townhall.com. 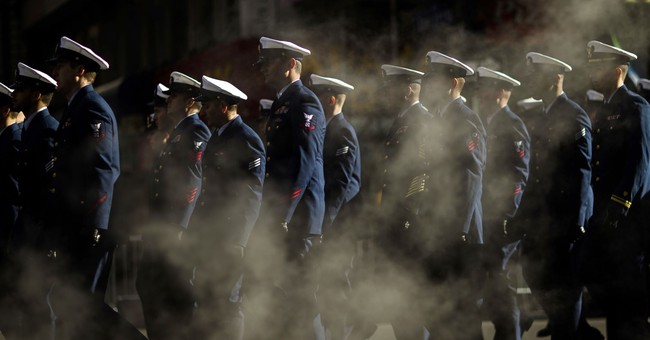 I spent 26 years in the United States Navy before I became an associate dean at Hillsdale College. While my life took me from service in the military to service in education, I’ve learned that the opposite route is also effective: Liberal arts education is, in many ways, a perfect pathway to military service.

Liberal arts students spend four years working through a core curriculum that addresses the great questions of history, philosophy, and theology. It sounds lofty (and it is), but it also calls them to consider their duty as citizens. From this education, they begin to understand the high costs of freedom and the history of those who have fought for it. At Hillsdale, every student is also required to study the Constitution as part of the curriculum. They learn what freedoms it protects and what it says about securing liberty for all Americans.

There are no more perfect candidates to lead this initiative than those liberal arts students who have studied the country’s history and its Constitution. They understand not only what is at stake but also the duty of a citizen.

I remind Hillsdale College students that freedom is being fought for every day, not just on Veterans Day. And every generation has a role to play in protecting that freedom if we are to remain free.  As they study the liberal arts, they develop further an attitude of gratitude to the men and women who have helped secure and maintain the liberties they so freely enjoy.

In the 1860s, Hillsdale sent more soldiers to the Civil War than any other?civilian college?in America. On the College’s campus in Michigan, there is a monument honoring Civil War era Hillsdale students who died during the Civil War, never able to finish their education. Atop the monument, a soldier holds a flag with a broken staff high, symbolizing determination and hope in the face of possible defeat. Nearby, a statue of Abraham Lincoln faces the soldier with his head low in mourning over all the men who will give their last full measure of devotion in the Civil War. Frederick Douglass, the African-American abolitionist, spoke twice at Hillsdale and his statue faces the soldier with direct resolve and foresight, knowing that the freedoms gained that all men are should be free, will be worth the high cost.

But it’s not enough just to study the Constitution—we have to protect what it stands for. And its principles should be always at the forefront not just of our minds but of our actions.

At Hillsdale, we have many students who attend the Marine Corps’ Platoon Leadership Candidate Program during the summers, earning a commission when they graduate. Others go on to medical school through the military’s Health Professional Scholarship Program, while still others pursue law, chaplaincy, or even nuclear power studies through the military branches. Some even serve in the Special Forces putting themselves, on the tip of the spear.

I often tell students, “boys and girls do what they want to do, Men and women do what they need to do. Which one will you be?” During my 9 years in education, I have seen many of them answer the call to serve. Hillsdale students are not told to serve, they sincerely volunteer to serve. It so happens that results in a lot of volunteers.

The beauty of the liberal arts is how studying these deep truths compels many to support and defend the Constitution of the United Sates. It’s a beautiful thing to witness! Those who go on to military service are elite—fewer than 1 percent of Americans will serve in this way.

But not every student will join the military after graduation, and that’s okay. These students also have a valuable role to play, using their knowledge to serve the cause of freedom in their careers and personal lives.

How would the Hillsdale students who gave their lives in the Civil War have reacted if they had known that—only a century later—thousands of young men would go off to fight in Vietnam, only to return home to be derided and spit on? It’s up to our youngest generations to ensure that everyone who answers the call to serve receives support from those at home.

There are no more perfect candidates to lead this initiative than those liberal arts students who have studied the country’s history and its Constitution. They understand not only what is at stake but also the duty of a citizen.

One of my sons is now an Army Ranger and recently returned from a deployment in Syria. When he first told us that he wanted to join the Army, I asked him if it was because of all those military posters I brought home for him to hang in his room. “No,” he said. “It’s because when I was growing up, we lived all over the world, but there’s no place like America. There’s no place like home and I want to protect it.”

Jeffery Rogers is the Associate Dean of Men at Hillsdale College