Why Is a Great Senate Office Building Named for a Modern Racist?

Jeff Jacoby
|
Posted: Sep 04, 2018 12:20 PM
Share   Tweet
The opinions expressed by columnists are their own and do not necessarily represent the views of Townhall.com. 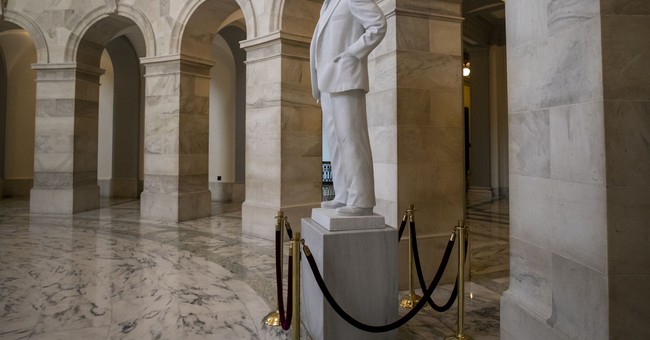 When legislation was introduced in 1972 to name the Old Senate Office Building for the recently-deceased Richard Russell Jr. of Georgia, the only senator to speak against the resolution was Hart, the gentle Michigan Democrat known as "the conscience of the Senate."

Hart did not deny that Russell had been an "impressive and effective" legislator, one of the Senate's "giant figures." But rushing to name one of the capital's major buildings after someone who had just died was a mistake the Senate might later regret. "I thought we had learned," he said, "that it is unwise to anticipate history's verdict."

Hart's colleagues ignored his advice. By a vote of 99 to 1, the imposing edifice on Constitution Avenue was formally named the Russell Senate Office Building.

But history's verdict on Russell has changed.

When Senator Chuck Schumer of New York proposed on Sunday that the Russell building be renamed in honor of Senator John McCain, the suggestion was quickly endorsed by several senators from both parties, including Republican Senators Roy Blunt of Missouri and Jeff Flake of Arizona, and Schumer's fellow Democrat Chris Coons of Delaware. Forty-six years ago, it may have seemed a no-brainer to attach Russell's name to the great marble-and-granite landmark in which he spent so much of his working life. Yet as Hart perhaps foresaw, the decision was bound eventually to generate second thoughts.

The longtime Georgia senator was indeed a Senate giant. Revered by allies and respected by opponents, Russell was an unparalleled legislative strategist; his mastery of Senate rules was so profound that he was widely regarded as "the senator's senator." As chairman of the Armed Services Committee, he deeply influenced US military policy during the Korean and Vietnam wars. And though he was the mightiest Senate baron of his era, there was nothing in him of the egomaniacal martinet. Russell was renowned for the courtesy, discretion, and personal kindness he showed his colleagues.

He was also racist to the core.

Russell's virtues ran deep, but his deep loathing of black equality and civil rights ran deeper. During his long congressional career, he fought hard for causes he cared about: military preparedness, support for farmers, school lunches for the needy. But he fought hardest of all for the repression of black Americans and the preservation of Jim Crow segregation.

For decades, as the drive for civil rights was becoming the overarching moral issue in American life, Russell deployed his parliamentary genius to defeat every bid for racial justice. He blocked bills to make lynching a federal crime, to ban the poll tax, and to desegregate public schools. He filibustered the 1964 Civil Rights Act, proposing instead that blacks be relocated out of the South. "If the people of the Southern states are to be forced to accept and conform to some federally dictated social order which is wholly alien to them," Russell argued, "then it is only fair and right that the Negro population be spread more evenly over all sections of the nation."

When President Truman sought to end segregation in the US armed forces, Russell was horrified. "The incidence of syphilis, gonorrhea, chancre, and all other venereal diseases is appallingly higher among the members of the Negro race," he declared, and allowing black and white troops to serve in the same military units, Russell said, "is sure to increase the numbers of men who will be disabled through communicable diseases."

The prospect of black equality in civilian life was even more alarming.

"There is no such thing as a little integration," he said in 1957. "They are determined to get into the white schools and into the white restaurants and into the swimming pools." That, he warned his Senate colleagues, "would mean a mongrel race [which] would result in destroying America."

Russell was a great senator. But on the foremost moral issue of his time, he was consistently, passionately, utterly wrong. He was a white supremacist not in the 1800s but in the modern era, fighting civil rights long after most Americans had come to support the cause. There is no shortage of public facilities that bear his name, but the storied Senate Office Building in the nation's capital should never have been one of them.