We Worship Our Politicians — and We Despise Them 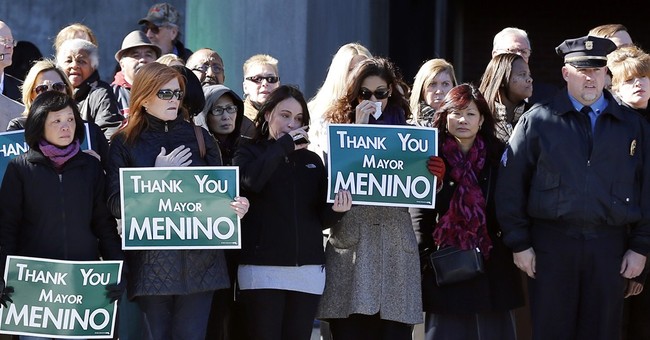 Of course it was only by happenstance that former Mayor Thomas Menino died just days before the 2014 election, and that his funeral at Most Precious Blood Parish in Hyde Park coincided with the closing hours of all the campaigns whose outcomes would be decided on Tuesday. But that unplanned juxtaposition couldn't have illustrated more vividly the emotional extremes we resort to when it comes to political figures.

A newcomer watching the local TV news broadcasts in Boston early Monday morning might reasonably have concluded that the former mayor had been a hero of mythic proportions, a saint and a superstar whose goodness was unbounded and whose shortcomings were nonexistent.

Hours before the funeral began, the coverage was already wall-to-wall Menino. Reporters and camera crews were stationed not only at Faneuil Hall, where Menino had lain in repose on Sunday, and at the church where his funeral Mass would take place, but also at various locations along the route to be followed by the procession bearing Menino's remains through the city.

Bystanders were interviewed, and praised the late mayor unstintingly. Dignitaries were seen as they arrived to pay homage. Archival video clips showed Menino in moments of triumph and celebration. Appreciation and admiration overflowed for the politician who had ruled City Hall for two decades.

Then the stations went to a commercial break, so that viewers could be told how rotten politicians are.

With the election just a day away, one campaign spot followed another, and the bottom line in most of them was that the other guy stinks. If all you knew about the candidates running for governor and Congress were what you picked up from their opponents' ads, you would be revolted. Who could possibly want to vote for such vile cheats and greedy liars and haters of the common good? Why, they're nothing but lackeys in the pocket of Wall Street, or stooges who ask "How high?" when Barack Obama tells them to jump. Richard Tisei is a right-wing hater of veterans! Seth Moulton is a hypocrite backed by out-of-state billionaires! If Charlie Baker wins, everyone else loses! If Martha Coakley wins, taxes are going up, up, up!

And then it was back to the tear-floods and sigh-tempests for Menino.

Voters worship politicians — or despise them. We extol them as demigods who can accomplish everything we crave — or revile them as crooks, drunk with power and self-aggrandizement. Scandals involving public officials seem never-ending. So do the outpourings of acclaim and adoration when powerful officeholders retire or die.

The fulsome Menino coverage, interspersed with so many pre-election attack ads, was a neat demonstration of the public's bipolar response to those we entrust with political power.

In a different way, the coverage also illustrated the contrast between the importance society and the media attributes to the death of politicians vs. the much more common shrug of insignificance when someone whose life wasn't consumed with politics is laid to rest.

Watching the TV news early on Monday, I learned that Menino's wasn't the only funeral Mass at Most Precious Blood Parish that day. More than once, I heard a reporter or anchor mention that another burial was taking place first, which was why a hearse could be seen there long before Menino's cortege had made its way to Hyde Park.

Whose funeral? Apparently no one thought that detail was important enough to mention.

Her name was Mary Ann Carty. She was 75 and had been sick for years, but her physical weakness took nothing from her personality — or from her passion for Irish culture. She had been one of the founders of Cumann na Gaeilge, the Irish Language Society of Boston, and remained an active member more than 40 years later.

"My God, she was sassy," her friend Molly Hester, a 24-year-old graduate student in mechanical engineering who shared Ms. Carty's love of Gaelic, told me on Monday. "She had such a great sense of humor. We would sit and have a pint together — I would drink Guinness and she would have a Sprite." Another friend described her as "a great soul," dryly funny and possessed of a remarkable memory — and always happy to "geek out" about the most effective ways to teach Irish.

Was Mary Carty's death newsworthy? Granted, she wasn't the longest-serving mayor in Boston's history. She didn't wield political power. She wasn't a celebrity.

But she lived and was loved and left her own mark on this town. She and Tom Menino resided in the same neighborhood, died on the same day, and lay before the same altar as the prayers for absolution were said. Within hours of each other, they were buried in the same cemetery. Her passing may not have merited Page 1 coverage. Would it have been so hard to mention her name?