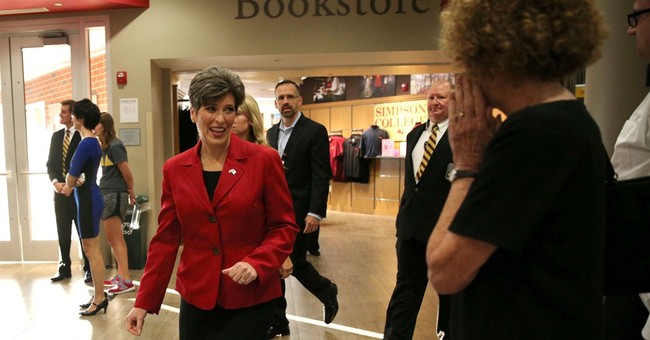 One of the year's most effective campaign ads was first aired last March by Iowa Republican Joni Ernst, then a relatively unknown candidate for the US Senate.

That got attention. The ad went viral on YouTube. Talk shows and cable news found it irresistible. Satirists like Stephen Colbert had a field day. (Colbert said he was pulling for Ernst "whole hog, or whatever's left of the hog when she's done.")

But the real payoff was with voters: Ernst's name recognition and popularity soared. She won the GOP primary in a landslide, and according to most recent polls is headed to Election Day with a narrow lead over her opponent, four-term congressman Bruce Braley. "Washington's full of big spenders," Ernst tells viewers in the ad. "Let's make 'em squeal."

Journalists and analysts who specialize in politics and fiscal affairs sometimes roll their eyes wearily when candidates like Ernst vow to take a knife to wasteful government outlays. After all, they note, there has never been a line item in anyone's budget labeled "waste, fraud, and abuse." Spending that Candidate X may call outrageous and profligate, Incumbent Y and Lobbyist Z are apt to defend as invaluable and essential. But a pitch like Ernst's often strikes such a chord because voters know it isn't that hard to identify fiscal abominations. Indeed, the government itself often points them out.

Take, for example, the 62-page report released last month by the Government Accountability Office, an investigative agency that works for Congress. The GAO found that between 2011 and 2013, the federal government spent more than $775 million to keep tens of thousands of employees on paid leave for weeks, months, or even years. Longstanding government personnel rules, affirmed repeatedly in rulings by the comptroller general, expressly limit paid leave to "rare circumstances" in which an employee's presence in the workplace is considered a threat to people or property. Nonetheless, GAO tallied more than 57,000 civilian employees who were put on paid "administrative leave" for at least 30 days — hundreds of them for as much as three years.

"While the employees stayed home, they not only collected paychecks but also built their pensions, vacation, and sick days, and moved up the federal pay scale," reported The Washington Post. And the GAO couldn't help understating the true cost of paid leave; it had data "for only about three-fifths of the federal workforce since not all government agencies keep track of the practice."

The reason so many federal workers were paid not to work? Generally because they were being investigated for misconduct or criminal acts, and it was easier to pay them to stay away then to fire them, suspend them without pay, or reassign them to other tasks until their case was resolved. Oklahoma Senator Tom Coburn describes it as "Paid Vacations for Bureaucrats Gone Wild" in his most recent "Wastebook," an annual compilation of fiscal dissipation and squandered tax dollars. Coburn's summary crystallizes the egregiousness of a practice that managers at many government agencies have come to take for granted:

"Charging booze and personal trips on the office credit card. Passing out on the job after a late night partying. Wasting most of the work day surfing for smut on office computers.… Any one of these outrageous behaviors would be reason enough for most to be fired … unless, of course, you are on the federal government's payroll, in which case you might instead get a paid vacation lasting months or even years." The promiscuous use of paid leave is only one of 100 bizarre, infuriating, or frivolous expenditures detailed in Coburn's "Wastebook."

It isn't just the federal government that lets employees facing disciplinary action stay home on full pay. The Boston Globe last year detailed numerous local examples of the same outrageous practice. Among them: the Waltham police chief who continued to collect his $146,305 annual salary, plus a longevity bonus, while awaiting trial on assault charges, and the Lawrence cop who stayed on the municipal payroll despite his indictment in federal court for bribery. The Boston Herald reported on Tuesday that 41 Boston Public Schools employees charged with wrongdoing have been idled — yet are still being paid a combined $3 million in yearly pay.

You don't have to be an investigative reporter or a GAO expert to know that government workers at all levels are routinely held to a different standard than employees in the private sector. "Waste, fraud, and abuse" may not appear as a line item in government budgets, but the fortune it's costing taxpayers is all too real. Whether experience at hog-castrating is useful for stamping out such obnoxious mismanagement is an open question, but it probably can't hurt.