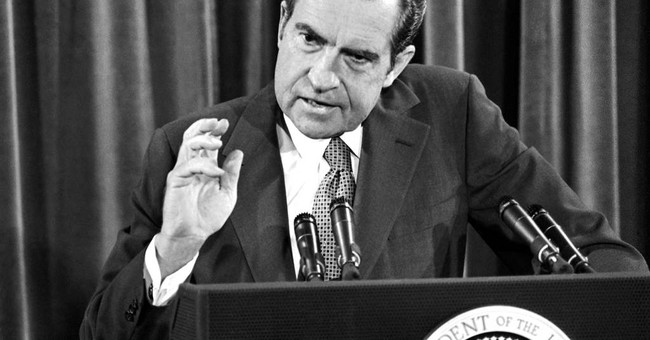 Perfect candor wasn't Richard Nixon's strong suit. But he spoke the gospel truth when he described himself as "an introvert in an extrovert's profession." He was one of the most successful political campaigners of the 20th century: winning election to both houses of Congress, serving two terms as Dwight Eisenhower's vice president, and twice winning the White House in his own right — the second time by a 49-state landslide.

Nixon spent decades in the public eye, and was indefatigable in pursuit of votes. Yet rarely has a politician seemed less suited for the political life. When he resigned the presidency, 40 years ago next week, everyone knew why he was ending his career in politics. But why did someone so solitary, so ill at ease with people, embark on that career in the first place?

For that matter, why does any introvert go into politics, a profession dominated by extroverts? Nixon's personality has been dissected by countless armchair psychoanalysts; much is made of the insecurities and resentments that drove him to win. But those inner demons could have propelled him in some other arena — law or academia or business. The lure of politics is the lure of power.

Nixon's desire for power ultimately led to the scandal that brought down his presidency. But it began with a more idealistic quest for historical significance. In his high school and college years, he hung above his bed a picture of Abraham Lincoln on which his grandmother, quoting Longfellow, had written: "Lives of great men oft remind us/ We can make our lives sublime." It was through politics that he would seek to leave his own mark on history. However his impact may ultimately be judged, there was something touching, even inspiring, about the young Nixon's willingness to endure the privation and distress inherent in seeking public office.

For John F. Kennedy, the pursuit of the presidency meant years of hiding the physical agonies of his numerous ailments — Addison's disease, colitis, ulcers, allergies, and the near-crippling pain of degenerative back problems. For Nixon it meant living with a different kind of misery — the forced bonhomie and small talk that he hated, the endless campaign stops and meetings with new people, the demand for ever more self-exposure from one who was only comfortable in solitude.

"I'm fundamentally relatively shy," then-Vice President Nixon told the journalist Stewart Alsop in 1959. "It doesn't come natural to me to be a buddy-buddy boy. . . . I can't really let down my hair with anyone." Most politicians relish the company of others and thrive on the schmoozing and flesh-pressing of an election campaign — think of Bill Clinton, never more alive and energized than when in the midst of the fray, working a rope line, charming voters. As for Nixon, the harder he worked at appearing outgoing and convivial, the more he came across as . . . someone trying hard to appear outgoing and convivial.

Nixon was at his best when analyzing national and international affairs, and his stiffness and maladroitness in social situations must have been an unending ordeal for him.

"No matter what he did, he seemed to come across as flat, unattractive, unappealing," wrote H. R. Haldeman, Nixon's chief of staff, in his post-White House memoir. "He couldn't relax with people other than his family." Even in personal settings he "was stiff, artificial, sometimes even embarrassing with individuals." Henry Kissinger, meeting Nixon for the first time after the 1968 election, was struck by the president-elect's painful shyness. "Meeting new people," Kissinger later observed, "filled him with vague dread." Had Nixon not gone into politics, Elliot Richardson mused, he might well have made his mark as an intellectual.

But Nixon did go into politics, with all its indignities and discomforts. And however excruciating and unnatural he may have found the process of campaigning, he succeeded brilliantly: from freshman congressman to a winning national ticket in just six years. When his political obituary was written after he lost his run for California governor in 1962, he staged an astonishing comeback. When Watergate destroyed his presidency and he resigned in disgrace, he undertook still another comeback, this time to rehabilitate his reputation.

Nixon craved a life of great purpose; he hungered to shape history. That meant going into politics, however great the cost. Years after leaving the White House, Nixon wrote in a memoir: "You should not enter politics unless you are prepared to pay the price. The paradox is that you cannot imagine how high it may be until you are already in the maelstrom." It had been rough on him, he conceded, but it had been worth it.