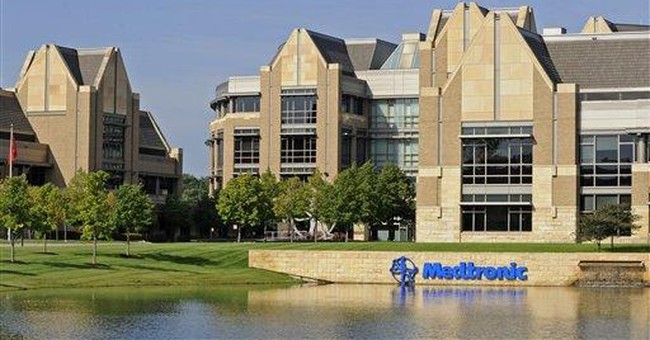 The corporate inversions just keep on coming, and the White House and its allies are calling them unpatriotic. But it's a funny sort of "patriotism" that insists American businesses put the Treasury's insatiable appetite for revenue ahead of the best interests of their customers, shareholders, and employees.

The latest inversion — the term for a corporate merger or acquisition that allows a US company to reincorporate overseas — is the largest to date: Chicago-based pharmaceutical company AbbVie is paying $55 billion to acquire Shire PLC, an Irish drug maker incorporated in the United Kingdom, but with a manufacturing and management base in Lexington. By moving its legal domicile to the UK, AbbVie expects to see a lower tax bill. The statutory corporate tax rate in Britain is just 21 percent. In the United States, it's a chart-topping 40 percent — the 35 percent federal rate plus an average of 5 percent imposed by the states. By 2016, the move should slice AbbVie's effective tax rate to 13 percent from the 22 percent it pays now, saving millions of dollars a year.

Nearly as big as the AbbVie-Shire deal was one announced last month. Medical-device giant Medtronic is acquiring Covidien, a health supplies business based in Mansfield but incorporated in Ireland, for $43 billion. The inversion will switch Medtronic's tax domicile to Ireland, which taxes corporate profits at just 12.5 percent — less than one-third the onerous US rate.

The number of inversions has been surging in recent years, putting Democrats' noses out of joint. Senator Carl Levin of Michigan is pushing legislation to impose a two-year moratorium on the transactions, which he denounces as "tax avoidance, plain and simple." Of course, tax avoidance is by definition lawful (as opposed to tax evasion, which is a crime). With America's corporate tax burden now the most punitive in the industrialized world, business executives would be derelict in their fiduciary duties if they didn't at least consider the competitive advantages of lawfully inverting.

Yet those who undertake such transactions are being blasted as un-American.

"Inverters are deserters," writes Fortune magazine's Alan Sloan in a Washington Post essay. Companies like AbbVie and Medtronic are abandoning America "to avoid paying taxes but expect to keep receiving the full benefits that being American confers, and for which everyone else is paying." Last week Treasury Secretary Jacob Lew urged Congress to "shut down this abuse of our tax system," and demanded "a new sense of economic patriotism" that won't tolerate such transactions.

This demagoguery is disgraceful. A company that structures a merger as an inversion is not deserting America, nor is it avoiding US taxes on revenue earned in the United States. Corporations that earn profits in America pay taxes in America, no matter where their legal domicile happens to be. AbbVie or Medtronic could reincorporate on one of the moons of Jupiter, and it would make no difference to IRS. As long as they keep doing business in the United States, their US income remains fully taxable.

It is only future foreign earnings — corporate profits earned abroad — that inversion protects from the IRS. Medtronic does business in scores of countries, paying taxes to those countries on income it earns within their borders. That won't change after the merger with Covidien. What will change is that Medtronic will no longer be taxed by the United States on income not earned in the United States. Unlike almost every other country, the US taxes American-domiciled businesses on their earnings anywhere on earth. As Abbott Laboratories CEO Miles White wrote recently, "It's a double whammy: the highest rate by far, and it's applied worldwide."

That's what's driving the wave of corporate inversions: Not a failure of "economic patriotism," but a predatory tax code that subjects American companies to economic pressures that foreign-based corporations are spared.

No taxpayer, individual or corporate, should be labeled unpatriotic for not paying more taxes than the law requires. "Anyone may so arrange his affairs that his taxes shall be as low as possible," wrote Judge Learned Hand, one of the most renowned jurists in American history. "He is not bound to choose that pattern which best pays the Treasury. There is not even a patriotic duty to increase one's taxes."

The way to keep US companies from re-domiciling overseas is not by cracking down, but by easing up. Lower the harsh rate, rein in the worldwide tax reach, and American businesses will have no reason to leave.