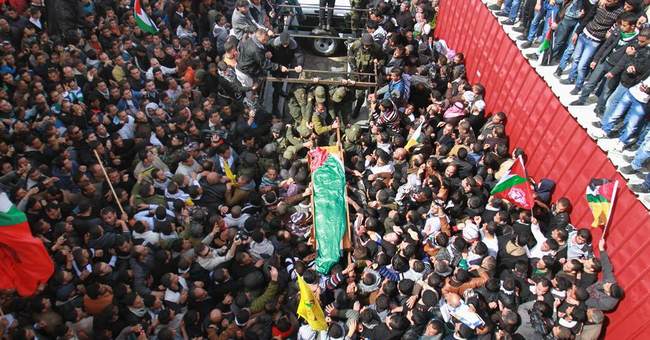 Israel is "running out of time," Secretary of State John Kerry told the American Jewish Committee in Washington this month. A two-state solution to the Palestinian conflict must be reached soon or "the insidious campaign to de-legitimize Israel will only gain steam," he warned. "Israel will be left to choose between being a Jewish state or a democratic state, but it will not be able to fulfill the founders' visions of being both at once."

It's an old refrain, erroneous but popular: Israel must make peace with the Palestinians — "peace" being defined as the creation of a 22nd Arab state — before high Arab birthrates turn the Jews into a minority in their own land.

In Jerusalem a few months ago, President Obama echoed the same claim.

"Given the demographics west of the Jordan River, the only way for Israel to endure and thrive as a Jewish and democratic state is through the realization of an independent and viable Palestine."

This so-called "demographic argument" may sound compelling, even ominous. But it rests on an obsolete stereotype of Arab women as baby mills, outbreeding their Jewish sisters at such a pace that it is only a matter of time before Jews are numerically overwhelmed on the land between the Jordan River and the Mediterranean.

In the 1960s, when the fertility rate for Israeli Arabs (9.2 births per woman) soared far above that of Israeli Jews (3.4 births per woman), that demographic challenge certainly seemed plausible. Yasser Arafat liked to say that the ultimate weapon in his arsenal against the Jewish state was "the womb of the Arab woman." The Palestinian Authority has always understood the propaganda value of population data. As the Palestinian Central Bureau of Statistics began its first census in the West Bank and Gaza in 1997, the bureau's director, Hassan Abu Libdeh, assured the New York Times that the results would amount to nothing less than "a civil intifada." In 2005, the bureau predicted that Jews would be a minority in "historic Palestine" (i.e., west of the Jordan River) by 2010. Now it says the tipping point will come by 2020.

Don't count on it.

Arafat's boast notwithstanding, Palestinian women, like women throughout the Muslim world, are bearing far fewer children than they used to. Within Israel proper, the birth rate among Muslims has trended steadily downward and stands now at 3.5 children per woman. It is even lower for Palestinians in the West Bank — just 2.91, according to the CIA Factbook. In a 2012 survey by the Population Reference Bureau of family planning in the Arab world, 72 percent of married Palestinian women (ages 15 through 49) said they preferred to avoid a pregnancy. That was typical of the modern Middle East: The same survey showed most Jordanians (71 percent), Egyptians (69 percent), and Syrians (68 percent) felt the same way.

But while Palestinian birth rates have dramatically declined, Jewish birth rates in Israel have been heading up. Israel now has the highest fertility level of any modern industrialized nation. The fertility gap between Israeli Jews and Israeli Arabs, a yawning 5.8 in the 1960s, is just 0.5 today. Defying longstanding conventional wisdom, writes former Israeli diplomat Yoram Ettinger, it is Israel's Jewish population that is undergoing a remarkable surge, rising from about 80,000 per year in 1995 to 130,000 in 2012. (The annual number of Israeli Arab births has held steady at between 35,000 and 40,000).

It is easy to get tangled in debates over the statistics — Ettinger led a detailed demographic study that exposed serious flaws in previous projections — but the bottom line is that demography, far from being a looming liability for Israel, is a strategic asset. The 6.3 million Jews living in Israel and the West Bank represent 66 percent of the area's population (not including Gaza, which Israel entirely relinquished to the Palestinian Authority in 2005). "Anyone suggesting that Jews are doomed to become a minority west of the Jordan River is either dramatically mistaken or outrageously misleading," Ettinger argues.

Is the "peace process" is worth pursuing? Would a two-state solution end the conflict? These demographic trends can't answer such questions. What they can do is remove the artificial pressure on Israel to do something – anything – before the sword of Damocles falls. And maybe, just maybe, they can open a few eyes among those who have been waiting, like Arafat, for "the womb of the Arab woman" to put an end to the Jewish state. Israel, now home to nearly half of the world's Jews, is a permanent fact of life in the Middle East. Any genuine peace process must start by accepting that reality.