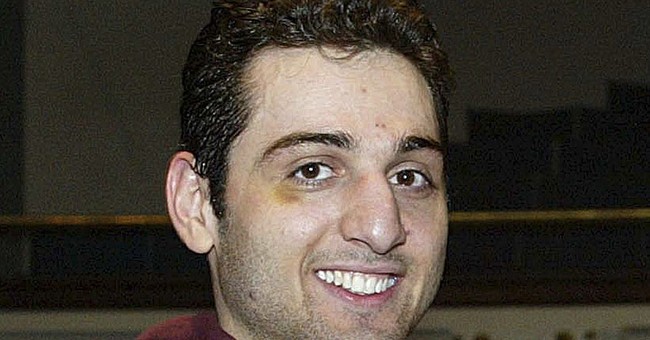 Broadcasting from Boston the day after the Marathon bombing, a correspondent for the French-Canadian TV channel LCN explained why Americans shouldn't be surprised when such atrocities occurred. It's the price they have to pay for being a superpower, Richard Latendresse told his viewers. It may be "un peu tragique," he conceded. But hey, that's what happens when a nation takes so much pride in its military power – and has inflicted similar suffering on others.

Writing in The Guardian the same day, Glenn Greenwald noted that so far there was "virtually no known evidence regarding who did it or why." Yet one paragraph later, he was railing against "attacks that the US perpetrates rather than suffers" and calling the bombings "exactly the kinds of horrific, civilian-slaughtering attacks that the US has been bringing to countries in the Muslim world over and over and over."

Then there was Richard Falk, a UN human rights investigator and professor emeritus at Princeton, who attributed the bloody mayhem in Copley Square to "our geopolitical fantasy of global domination." Themarathon bombings, Falk suggested in an article for Foreign Policy Journal, were afitting "retribution" for US actions abroad. Hepointedly quoted poet W. H. Auden's "haunting" line: "Those to whom evil is done/do evil in return."

Truly, there is something grotesque about people whose first instinct after something as awful as the Patriots Day terror attack is to parade their moral superiority by indicting America's culture, society, or foreign policy. Yet there never seems to be a shortage of such paraders, particularly in academia, the media, and the arts. Back in 2001, The New Republic ran a feature in the weeks following 9/11 called "Idiocy Watch," in which it catalogued the barrage of bitter and fatuous comments being made about the attacks by well-known intellectuals for whom ideology apparently trumped everything, decency included.

"We in America are convinced that it was blind, mad fanatics who didn't know what they were doing," said Norman Mailer, to cite just one of many examples. "But what if those perpetrators were right and we were not?"

To reread those words 11 years later is to be disgusted all over again that one of the nation's leading literary figures could have proposed that Osama bin Laden and the al-Qaeda hijackers were "right" to plan and carry out their ghastly slaughter. On the one-month anniversary of the Marathon bombings, the suggestion that four people died and scores were maimed because of America's global iniquity is no less revolting.

Yet that didn't inhibit London's former mayor Ken Livingstone, who went on Iran's English-language TV channel to explain that the terrorists detonated those pressure-cooker bombs because "people get incredibly angry about injustices" such as "the torture at Guantanamo Bay" and "lash out." It didn't stop Mark LeVine, a University of California history professor, from advising Americans "to admit that as a society they produce an incredible amount of violence," which in turn "helps produce people like the Columbine, Newtown or Boston murderers." It didn't deter former CIA analyst Michael Scheuer, who wrote a blog post headlined "US leaders' fingerprints are on the detonators," since it is "blatantly obvious" that what motivated the terrorists was American policy in the Middle East.

But it is no part of constructive self-criticism to make excuses for those who commit acts of terrorism, or to explain why their victims, as citizens of the United States, had it coming. You don't demonstrate sensitivity to other cultures by treating willful savagery against ours as something less than savagery. Terrorism is never justified. Perpetrators are not victims.

In the wake of a bloody atrocity like the one in Boston last month, the first duty of civilized people – regardless of politics or ideology -- is not to start asking why the evildoers hate us, or how they became so angry.

It is to call their actions evil, and denounce them without equivocation.