Wray Is Wrong as FBI Director

Jeff Crouere
|
Posted: Sep 20, 2020 12:01 AM
Share   Tweet
The opinions expressed by columnists are their own and do not necessarily represent the views of Townhall.com. 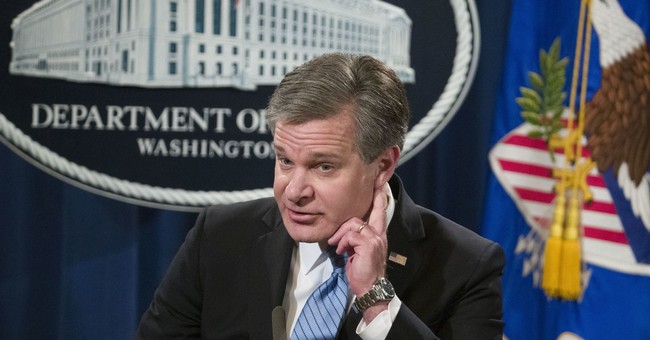 In May of 2017, President Trump did the right thing and fired FBI Director James Comey, the individual at the center of the attempt to overturn the 2016 election results. Comey orchestrated the spying efforts on President Trump and his campaign, which included the FBI improperly applying for four separate Foreign Intelligence Surveillance Court warrants to eavesdrop on campaign aide Carter Page. He also authorized a politically motivated investigation into Lt. General Michael Flynn and encouraged the entrapment of Flynn by his FBI agents in an infamous White House interview.

Clearly, Comey was a disastrous FBI Director; however, the President made a terrible choice when he replaced him with Christopher Wray, a bureaucrat who has not reformed the agency in any meaningful way. He also seems to be incapable of identifying the real threats that are facing the country.

In testimony on Thursday before the House Homeland Security Committee, Wray made a series of remarkable claims. He stated that Antifa is not a group but is more of “an ideology or maybe a movement.” He also refused to identify Chinese efforts to interrupt the 2020 election and again focused attention on activities from Russia.

With these remarks, Wray is doing the bidding of the Democrats and following their talking points. Regarding Antifa violence, House Judiciary Committee Chairman Jerry Nadler (D-NY), claimed it was a “myth.”

Nadler has been in his congressional cocoon for too long. Antifa has been active for several years, but since the death of George Floyd on May 25, it has intensified its activities around the country. Millions of Americans have seen the frequent and disturbing video footage of rioting and looting throughout the country. According to U.S. Congressman Dan Crenshaw (R-TX), “there have been more than 550 declared riots, many stoked by extremists, Antifa and the BLM (Black Lives Matter) organization.”

In his comments to Wray at the committee meeting, Crenshaw also noted the rioters have done an extensive amount of damage. He stated that “between one and two billion dollars of insurance claims will be paid out. That doesn’t come close to measuring the actual and true damage to people’s lives, not even close.”

Crenshaw is right as many of our urban areas, such as New York, Washington D.C., Minneapolis, Seattle, Portland among others have been devastated by a series of violent protests. In the past few months, scores of monuments have been destroyed, and significant damage has been done to businesses and public buildings. The group has also attacked innocent civilians and targeted police officers. As Crenshaw asserted in this rebuttal to Wray, Antifa matches the definition of a domestic terrorist organization.

Incredibly, Wray does not believe there is an organization that is directing these numerous riots across the country. He was unwilling to acknowledge the obvious. As Crenshaw explained to the misguided FBI Director, Antifa, “coordinates regionally and nationally, wears a standardized uniform. It collects funds to buy high powered lasers to blind federal officers, build homemade explosive devices, feed their rioters since they clearly aren’t working, and then bail out those who’ve been arrested. This is an ideology that has trained its members, makes shield wall phalanxes to attack federal officers. It formed an autonomous zone in an American city and besieged a federal courthouse in another. So, I mean, it just seems to be more than an ideology.”

Of course, it is much more than a philosophical movement and the FBI should be arresting the primary contributors and organizers of Antifa, but, instead, most of the charges that have been brought against the rioters have been for minor offenses.  America is still waiting for the FBI to treat Antifa as a domestic terrorist organization, which is what President Trump has declared many times.

While the President may view Antifa as our major domestic threat, FBI Director Wray declared that white supremacists comprise the largest share of racially motivated terrorism in our country. He also warned the committee about the involvement of Russia in the 2020 election. Wray maintained that “we certainly have seen very active, very active efforts by the Russians to influence our election in 2020...to both sow divisiveness and discord and...to denigrate Vice President Biden.”

Wray’s testimony seemed tailor-made for an upcoming commercial for former Vice President Joe Biden. President Trump was clearly upset at Wray’s comments. Regarding Wray’s view of Antifa, the President said, “The fact is Antifa is a bad group. They’re bad, and when a man doesn’t say that that bothers me. I wonder why he’s not saying that?”

The President was also troubled by Wray’s focus on Russian electoral interference instead of the numerous activities being conducted by the dictatorial communist Chinese regime. According to the President, “the big problem is China, and why he doesn't want to say that that certainly bothers me.”

The President should not be perplexed by FBI Director Wray’s performance. He is a bureaucrat who is not a reformer. Wray has not made the personnel or policy changes that should have been forthcoming after Comey’s firing. He seems more concerned about maintaining his standing with Democrats in Congress and the media, so he will never validate the President’s viewpoint. On issue after issue, Wray has been a total disappointment.

In his comments to the media, the president noted that he was “looking at a lot of different things” regarding the future of Wray as FBI Director. There should be only one move to consider, firing this FBI Director as soon as possible.

Jeff Crouere is a native New Orleanian and his award-winning program, “Ringside Politics,” airs locally at 7:30 p.m. Fridays and at 10:00 p.m. Sundays on PBS affiliate WLAE-TV, Channel 32, and from 7-11 a.m. weekdays on WGSO 990-AM & www.Wgso.com. He is a political columnist, the author of America's Last Chance and provides regular commentaries on the Jeff Crouere YouTube channel and on www.JeffCrouere.com. For more information, email him at jeff@jeffcrouere.com.
Share this on Facebook
Tweet
Trump Has An Idea on Who Should Run for Governor of Wisconsin
Rebecca Downs
Democrats Have Some Really Bad News for Fierce Trump Critic Adam Kinzinger
Rebecca Downs
President Joe Biden May Not Be Able to Escape This Major Crisis Before the Midterms