Hockey Scores a Goal for America

Jeff Crouere
|
Posted: Aug 02, 2020 12:01 AM
Share   Tweet
The opinions expressed by columnists are their own and do not necessarily represent the views of Townhall.com. 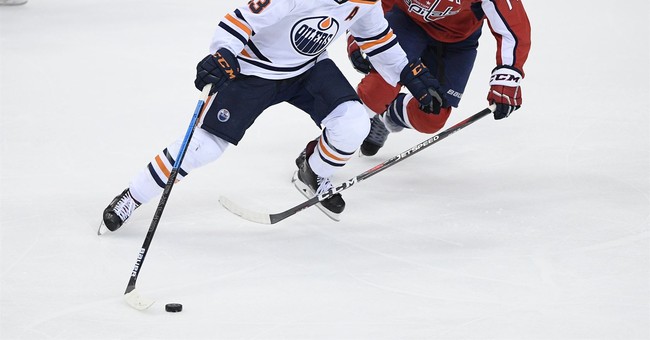 It might be time for patriotic Americans to discover a new favorite sport, professional hockey. Unlike other professional athletes, hockey players have refused to show disrespect toward the National Anthem. At exhibition games this week, all players with the New York Rangers, New York Islanders, Pittsburgh Penguins and Philadelphia Flyers stood for the National Anthem.

Likewise, for Thursday night’s start of the season, all the players with the Dallas Stars and the Nashville Predators stood for the National Anthem. After the game, a few of the Dallas players displayed their clothing featuring the slogan, #WeSkateforEquality.

The NHL is allowing players to support whatever cause they want for the upcoming season. Such advocacy is fine, part of our 1stAmendment rights of free speech. However, it is respectful for NHL players to advocate their causes on their own time and not during the playing of the National Anthem.

Unfortunately, such a message is anathema to the National Basketball Association. This league has won the title for being the most “woke.” In their Orlando “bubble,” the NBA painted “Black Lives Matter” next to the basketball court.

At Thursday night’s opening game between the Utah Jazz and the New Orleans Pelicans, every single player, coach, and referee knelt during the National Anthem. For good measure, all the players wore a “Black Lives Matter” shirt. Some raised their fist in a “Black Power” salute. Almost all the players wore social justice messages on their jerseys.

The NBA is fully onboard with the organization Black Lives Matter, despite the well-known Marxist training of the group’s founders. The leaders of the organization have also expressed support for policies which are both anti-family and anti-Semitic. Clearly, it does not matter to the NBA.

In the first three games of the NBA’s renewed season, only one player, Jonathan Isaac of the Orlando Magic, refused to kneel during the playing of the National Anthem. In addition, he did not wear a “Black Lives Matter” shirt. According to Isaac, “I felt like I wanted to take a stand. I feel like we all make mistakes but I think that the Gospel of Jesus Christ is grace for us and that Jesus came and died for our sins…and that when we understand this, we can get past skin color.”

Isaac should be commended for his courageous stand. Unfortunately, he plays basketball for a league that is complicit with human rights abuses occurring in communist China. Why would the NBA care about the radical ideology of Black Lives Matter when it refuses to condemn the brutal communist regime in China?

A new ESPN report asserts that players as young as 13 are being physically abused and denied adequate education by coaches at NBA training academies in China. The anonymous coaches who were interviewed for the report claim that the NBA told them to cover-up the abusive behavior.

This communist dictatorship is very influential within the NBA, which profits handsomely from the relationship. Thus, no criticism of communist China is allowed. In October, when Houston Rockets General Manager Daryl Morey tweeted a message of support to the young people fighting oppression in Hong Kong, the NBA forced him to apologize.

The leading star of the NBA, LeBron James, stated that Morey was “misinformed or not really educated on the situation.” Of course, Morey knows much more about “the situation” than James, who has never issued one negative comment toward China, a country that represses ethnic and religious minorities and is engaged in outright hostile and belligerent behavior toward the United States.

The NBA considers itself to be an international league and is not concerned if it affiliates with the country posing the greatest threat to the national security and health of the United States. It is well known that communist China lied about the origins and spread of Covid-19, which has become a worldwide pandemic.

While other professional sports leagues do not share the NBA’s disgusting position toward communist China, they do share a commitment to showcasing their social justice credentials. In the opening games of the new Major League Baseball season, players knelt before and during the playing of the National Anthem. In addition, when the NFL starts their season in September, fans can expect almost all the players to kneel during the National Anthem as well.

This behavior is not acceptable to President Trump. Last week, he tweeted, “Looking forward to live sports, but any time I witness a player kneeling during the National Anthem, a sign of great disrespect for our Country and our Flag, the game is over for me!” This view was also expressed by Mike Ditka, former NFL broadcaster, coach, and Hall of Fame player with the Chicago Bears. He said that players who kneel during the National Anthem should “get the hell out of the country.”

Trump and Ditka might not speak for a majority of Americans, but if the 42 percent who are disgusted by kneeling decide to no longer watch the NFL and other professional sports with such protests, it will negatively impact ratings, which will ultimately devastate the financial bottom line for the leagues. If this unpatriotic conduct continues, millions of Americans will not support such “great disrespect for our Country and our Flag” and these “woke” leagues will get their just deserts.

Jeff Crouere is a native New Orleanian and his award-winning program, “Ringside Politics,” airs locally at 7:30 p.m. Fridays and at 10:00 p.m. Sundays on PBS affiliate WLAE-TV, Channel 32, and from 7-11 a.m. weekdays on WGSO 990-AM & www.Wgso.com. He is a political columnist, the author of America's Last Chance and provides regular commentaries on the Jeff Crouere YouTube channel and on www.JeffCrouere.com. For more information, email him at jeff@jeffcrouere.com
Liberal Media Goes Bananas Over FBI Raid on Trump's Mar-a-Lago Residence
Matt Vespa
'Under Siege': FBI Raids Mar-A-Lago, President Trump Responds
Spencer Brown
Dan Bongino on FBI's Raid on Mar-a-Lago: 'This Is Some Third-World Bulls**t Right Here'
Matt Vespa
Did You Notice What Was Behind an Activist Who Is Against Texas Busing Migrants to NYC?
Julio Rosas
80-Year-Old Woman Banned From Community Pool After Complaining About Biological Male in Ladies Restroom
Madeline Leesman
Sarah Huckabee Sanders Brings the Receipts to Prove Arkansas Newspaper's Bias
Spencer Brown