Jeff Crouere
|
Posted: Feb 26, 2018 9:25 AM
Share   Tweet
The opinions expressed by columnists are their own and do not necessarily represent the views of Townhall.com. 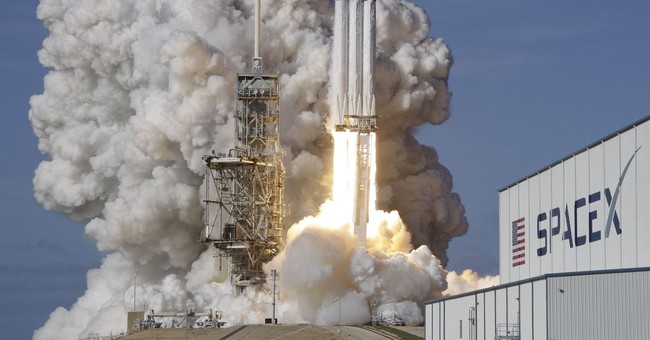 Last week, the United States’ National Space Council met for the second time at the Kennedy Space Center in Florida. Vice President Mike Pence led the meeting, which was titled “Moon, Mars and Worlds Beyond: Winning the Next Frontier.” The focus of this gathering of government officials, national security experts, and space entrepreneurs was the ever-expanding commercial and scientific opportunity of the “next frontier.”

According to President Trump, the next frontier should include a return to the Moon with a subsequent trip to Mars. To fulfill this goal, the president’s budget includes $19.9 billion for NASA in the 2019 fiscal year, followed by annual allocations of $19.6 billion until 2023.

When the Space Council was relaunched last year, members emphasized their focus would be on efficiently spending tax dollars on achievable projects offered by space industry leaders with a reliable track record. Thankfully, the administration remained resolute in its original objectives. The desire to increase competition and innovation through objective deliberation and analysis is ostensibly why Pence appointed a 29-member advisory group in its second meeting, which included representatives from all the leading aerospace manufacturers, including Lockheed Martin, Boeing, and SpaceX.

The fact that the National Space Council stuck to its keys principles is relieving. After the recently successful inaugural launch of the SpaceX Falcon 9 Heavy rocket, some pundits – surprisingly, even a Trump administration adviser – have implicitly suggested that the Space Council alter its original objectives so companies like SpaceX can artificially receive more support.

This would be an odd switch for a council dedicated to competition. SpaceX’s recent track record highlights why such a shift would be ill-advised.  While SpaceX is enjoying plenty of positive press after its latest successful launch, this exuberance is obscuring a rocky track record. As of last year, repeated failures and delays have resulted in it amassing 70 uncompleted missions worth a whopping $10 billion. And, the significant achievement of launching the cost-cutting Falcon Heavy this month occurred after almost five years of Falcon Heavy delays, a recent SpaceX engine explosion and launchpad malfunctions, and the postponement of yet another Falcon 9 rocket launch set for this weekend.

All these incidents have increased concerns about the durability of the SpaceX launch vehicles. In contrast, its only major competitor, the United Launch Alliance, has a perfect record after 12 years and 124 launches. These differences have not escaped the attention of the Defense Department’s Inspector General, who reported that SpaceX suffered from more “deviations from quality standards” than ULA – 50 percent more, to be precise.

This is not to say that SpaceX doesn’t have anything positive going for it, which could lead the company to deservingly earn contracts. Over the past few years, SpaceX has managed to successful cut the sticker prices of many launches, in some cases costing $50 million less than its leading competitor. However, the White House’s leading advisers in the space realm know that sticker price is just one factor in the decision-making process, as is dependability and the prospect of hidden costs, which come in the form of launch malfunctions. That’s why having an array of contractors at the government’s disposal is so important – so taxpayers always get the most bang for their buck and national security remains adequately protected. Any move by the council to artificially throw work towards any vendor would undermine its very mission.

The National Space Council has a tremendous opportunity to revitalize the space industry, and it is encouraging that it is receiving input from a wide variety of manufacturers. But it is also important that the council hold vendors accountable] for their failures and not just blindly throw contracts to vendors and call it competition. Competition only makes vendors more efficient when they are all held accountable to the same standard. This type of process truly puts America First in space, both from a national security standpoint and in safeguarding the precious financial resources of our country’s taxpayers.

Jeff Crouere is a native New Orleanian and his award-winning program, “Ringside Politics,” airs locally at 7:30 p.m. Fridays and at 10:00 p.m. Sundays on PBS affiliate WLAE-TV, Channel 32, and from 7-11 a.m. weekdays on WGSO 990-AM & www.Wgso.com. He is a political columnist, the author of America's Last Chance and provides regular commentaries on the Jeff Crouere YouTube channel and onwww.JeffCrouere.com. For more information, email him at jeff@jeffcrouere.com