Jeff Crouere
|
Posted: Jul 09, 2016 12:01 AM
Share   Tweet
The opinions expressed by columnists are their own and do not necessarily represent the views of Townhall.com. 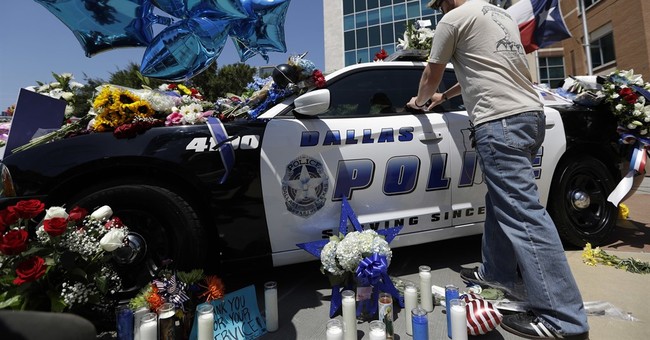 It did not take long for President Obama to use the tragic police ambush in Dallas, TX to push his gun control agenda. In fact, in his first statement on the shocking murder of 5 police officers, Obama introduced the issue. After condemning the “senseless murders” of the police officers, the President said, “We also know when people are armed with powerful weapons; unfortunately, it makes attacks like these more deadly and more tragic. And in the days ahead we’re going to have to consider those realities as well.”

One reality the President should consider is that his words matter. Earlier in the week, the President condemned the controversial police shootings of black men in Baton Rouge, LA and Falcon Heights, MN. On his Facebook page, Obama said, “a nation, we can and must do better to institute the best practices that reduce the appearance or reality of racial bias in law enforcement." He also noted that all Americans should "recognize the anger, frustration and grief that so many Americans are feeling" over the incidents and added that "Michelle and I share those feelings."

These observations, according to Milwaukee County Sheriff David Clarke, only exacerbated the already tense relations between the African American community and police officers. In fact, Clarke believes that Obama created more of a problem by pouring “gas on the situation with his dog whistle message” about the incidents.

This is a typical response from President Obama as he has been condemning the police ever since he took office. Back in 2009, he lashed out at Cambridge, MA police for acting “stupidly” in an incident involving Harvard Professor Louis Gates. After more information was divulged, the President had to backtrack and famously held a “beer summit” with the police officer and the professor to resolve the issue.

Several days after Michael Brown was killed by police officer Darren Wilson on August 9, 2014 in Ferguson, Missouri, the President expressed his condolences for the “heartbreaking” death and noted that the Justice Department was going to investigate the issue. Eventually, Officer Wilson was completely exonerated for his actions, though he lost his job and faced death threats. One year later, when Kate Steinle was killed by an illegal immigrant in San Francisco, CA, the President was silent, delivering no statement of support or any condolences for her family.

In recent months, there have also been numerous incidents in which police officers have been tragically killed in the line of duty. Very rarely has the President commented on these incidents, such as the recent case in Harvey, LA in which Jefferson Parish Sheriff’s Office Deputy David Michel, Jr., a white man, was killed by a young black man who should have been in prison. This case may have been racially motivated. Not only did the President ignore it, but also the national news media gave the case almost no attention. If the racial roles had been reversed, there is little doubt it would have received massive coverage from the news media.

Sadly, the attack in Dallas is the latest in a growing number of incidents involving police officers being targeted by criminals motivated by groups such as Black Lives Matter. In the view of William Johnson, Executive Director of the National Association of Police Organizations, the Obama administration’s “continued appeasements at the federal level with the Department of Justice, their appeasement of violent criminals, their refusal to condemn movements like Black Lives Matter, actively calling for the death of police officers, that type of thing, all the while blaming police for the problems in this country has led directly to the climate that has made Dallas possible.”

This is a strong condemnation from a top official with a respected police organization. In essence, Johnson believes that Obama has fostered a negative attitude toward police, which has contributed to more violence toward our nation’s police officers.  Clarke agrees and believes that Obama is “armed with powerful words and he’s (using) the words irresponsibly. It fuels this sort of anger toward the American police officer and I wish he’d knock it off.”

Unfortunately, there is little hope that the President will change between now and the end of his term next January. Nonetheless, we should all hope and pray that these cowardly attacks on innocent police officers end. The vast majority of police officers do a tremendous job under incredibly difficult conditions. They deserve our praise and thanks for confronting a criminal element that is growing bolder and more dangerous every day.