George and Barbara Not Enough to Save Jeb’s Campaign

Jeff Crouere
|
Posted: Feb 06, 2016 12:01 AM
Share   Tweet
The opinions expressed by columnists are their own and do not necessarily represent the views of Townhall.com. 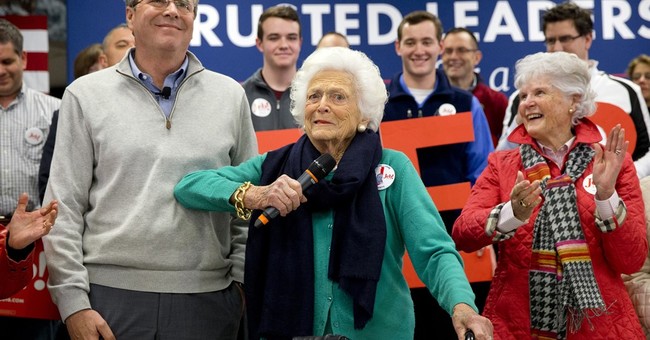 The results from Iowa were certainly interesting. On the Democratic side, Hillary Clinton and Bernie Sanders are virtually tied, giving both campaigns some momentum going into New Hampshire. Whereas, the laughable, struggling Martin O'Malley finally decided to end his ridiculous campaign after getting less than 1% of the vote in Iowa.

Also, on the Republican side, ending campaigns were Kentucky Senator Rand Paul, former Pennsylvania Senator Rick Santorum and former Arkansas Governor Mike Huckabee, who hoped to recapture the magic of 2008 and pull off a miracle upset in Iowa. It did not happen for Huckabee, Santorum or Paul and at least they had the good sense to quit. The same can't be said for former Florida Governor Jeb Bush, who finished a pathetic sixth place among Republican voters, yet vowed to continue the fight in New Hampshire and beyond.

Bush's anemic level of support was the best result of the Iowa election. It places his campaign on life support going to New Hampshire and makes his nomination very unlikely. Of course, this is all bad news for the Democrats who were looking to coast to victory in November if the Republicans nominated another Bush.

With the top three Republican candidates in Iowa being Cruz, Trump and Rubio, voters sent an unmistakable message to the GOP establishment that it is time for new leadership. It is also the only possible way for Republicans to have a chance of recapturing the White House in November.

How times have changed! Last year, Bush was the overwhelming favorite to win the nomination. He is part of the Bush dynasty as his father and brother served as president, so he had a tremendous built-in advantage. He enjoyed easy access to the wealthy, establishment donors who control the Republican Party. These power brokers flooded his campaign with massive donations, allowing Bush to establish the early lead in the polls and in the important category of fundraising.

It soon evaporated as Bush tangled with Donald Trump in the debates and was labeled both stiff and "low energy." Throughout his campaign, Bush has failed to connect with Republican voters looking for action on the important issues of the economy, illegal immigration and the fight against ISIS.

The end result was his uninspiring performance in Iowa, where he finished in sixth place with only 2.8% of the vote. In fact, Bush wasted almost $15 million in Iowa to garner just 5,165 votes, spending as astronomical $2,884 per Iowa vote.

His horrible showing reflects the desire of Republican voters to move past the Bush family and find new leadership in the party. Voters must realize that Jeb Bush is a creature of the much despised Republican establishment and, if elected, would not do anything to deal with the real crisis facing our nation today.

Despite the Iowa setback, the Bush campaign is making a final push in New Hampshire, and, especially, in South Carolina. Barbara Bush, Jeb’s mother, who previously was not thrilled about another one of her sons running for president, campaigned for Jeb in New Hampshire this week. She said Jeb was the “nicest, wisest, most caring, loyal, disciplined” candidate in the race. Of course, she acted like any supportive mother and praised her son, but it remains to be seen whether these words of affection will translate into votes for Jeb.

With both his mother and brother now fully on board and engaged, Jeb Bush is literally putting all of this political cards on the table. This is his final shot to make a move in the race. While the national polls continue to show Bush in the middle of the pack, the in-fighting among the top three candidates, Trump, Cruz and Rubio, may provide an opportunity for Bush to gain ground in the days ahead.

The dilemma of his candidacy is that he is not the type of conservative, reform oriented, leader the GOP or the country needs after eight years of Obama. It is time for a political revolution with courageous leadership, but Jeb Bush is too much of an establishment politician. For example, this week, Bush praised the president’s visit to the Baltimore mosque, claiming that it was “more than appropriate.” Of course, the difficulty with the visit is that the former imam of the mosque was a member of an Islamic organization tied to terrorism. He also worked for a relief organization that had radical associations. Other presidential candidates blasted Obama’s visit, but Bush refused to utter a negative word.

This response is in keeping with Bush’s political correctness and his moderate political philosophy, regardless of his claims to be a conservative. In these troubled times, what America needs is a strong conservative who will courageously move our country in a new direction. Electing Bush will basically mean more of the same and that, in a nutshell, is the problem with his candidacy.