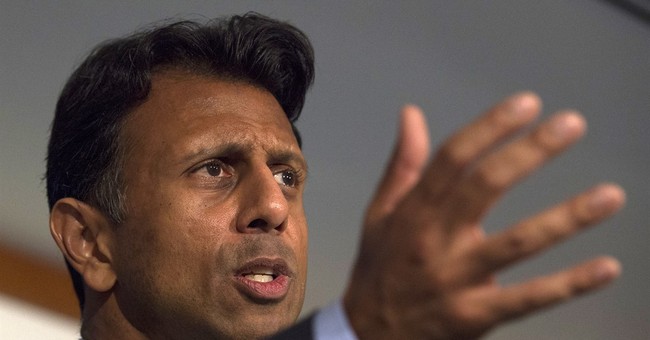 It was quite a scene at the National Press Club Thursday as Louisiana Governor Bobby Jindal joined the other Republican presidential candidates in attacking frontrunner Donald Trump.

However, unlike the other presidential aspirants, Jindal directed a series of personal insults against Trump.

According to Jindal, Trump is “a narcissist…he's an egomaniac.” He said that Trump is “full of foolishness and nonsense.” He also claimed that “Donald Trump is not a serious candidate. The only thing he believes in is himself.”

Wow, this is another perfect example of the pot calling the kettle black, politically speaking. Louisiana voters know full well that Jindal is an extreme narcissist. He practically started campaigning for President on the day he was elected Governor of Louisiana. He put his own selfish political interests over the needs of his constituents. This is why his approval rating in Louisiana registers an abysmal 32%.

After almost eight years of Jindal, Louisiana is suffering from a series of problems made worse by an absentee Governor. Currently, the state faces a growing budget deficit, a shortfall in the successful TOPS college scholarship program and a huge gap in Medicaid funding. There are a host of other problems such as crumbling infrastructure, a growing number of job losses, violent crime surging in the state’s major cities and a crisis in higher education with no end in sight to crippling budget cuts.

Jindal, who appeared in the State Capitol on only the first and last days of the last legislative session, provided no leadership on these critical issues. His agenda to solve the budget mess, promote religious liberty and stop the Common Core program was a total failure with Louisiana legislators who have as little regard for Bobby Jindal as the voters of the state.

To deal with the budget mess, legislators passed a plethora of tax increases, the most in state history, in an unconstitutional manner that will be challenged in court. Instead of stopping the madness, Jindal approved of the tax and fee increases, but encouraged the use of gimmicks and accounting tricks to hide the fiscal disaster.

Thankfully, there is now a campaign to replace the term limited Jindal. Lt. Governor Jay Dardenne is quipping that he is running as the incumbent. Incredibly, in 2015 alone, Dardenne has served as “acting Governor” of Louisiana for 104 days while Jindal has been out of Louisiana pursuing the pipe dream known as his presidential campaign. Clearly, Jindal has not been earning his salary and should return the funds to the people of Louisiana. To make matters worse, the taxpayers have to cover the cost of the Governor’s State Police security detail whenever he leaves Louisiana, adding further insult to injury.

In the 2016 GOP presidential race, Jindal is right, there is a candidate who is not “serious,” but it is not Donald Trump, who is the clear frontrunner. The one who is not “serious” is Bobby Jindal, who is languishing at less than one percent in the polls nationally and will be relegated to the “kiddie” table once again for the next GOP presidential debate. Jindal’s status as a minor candidate was referenced by Trump when he tweeted a priceless answer to the Governor, “I only respond to people that register more than 1% in the polls. I never thought he had a chance and I've been proven right."

In his speech yesterday, Jindal claimed that Trump was full of “nonsense,” but what is truly nonsensical is the thought of a person who failed miserably as Governor of Louisiana being promoted to President. Anyone so delusional should not be hired as President, but, as often said by Donald Trump, should be “fired” by the voters.