CME Group ($CME) is going to start a European exchange. There were various reasons given, but the most apparent was that many customers don’t want to do business in the US for fear of being caught in the snare of Dodd-Frank. As a long time Dodd-Frank detractor, I find that confirms some of the thoughts I have had.

However, strategically, I think it’s a good idea for an exchange like CME to pursue a growth strategy on its own. For years, there were two ways to grow business internationally. One was to sign a memorandum of understanding with another exchange and co-market. That never worked out so well. Economic interests were never clearly aligned and it just put off eventual competition. The only place where it created real value was the CME/SIMEX link up with a cross margining and clearing relationship. Then each exchange had an economic interest to support the other and CME won the Eurodollar ($GE_F) battle against LIFFE ($NYX) because of it.

When the landscape is viewed today, most of the exchanges worth buying have been bought. Some areas of the world aren’t ready for consolidation yet so there won’t be any take over transactions there. Hence, you have to build it yourself.

CME has built a clearing house in London. The cost to build a new electronic exchange there isn’t trivial, but it’s not terribly expensive either.

What will CME do with it? There is a lot of speculation and I’ll throw my two cents in. First and foremost, FX markets could trade there. CME has the most transparent currency markets in Chicago, and extending them over to Europe should be easy. Craig Pirrong makes some great points about fragmentation etc. But, markets all over the world are getting fragmented. I agree with him on that, but you have to go with the flow.

CME might be able to do a few more things that are creative though. First, no doubt they will use the European exchange and clearing house to try and create opportunities in over the counter instruments. OTC is supposedly the next land of milk and honey for exchanges so this will give CME a run at it on a different continent with different regulatory structures.

Additionally, CME will make a run at consolidating the EU interest rate curve on one platform. Currently, the short term interest rate futures (Euribor) trade at the Euronext-Liffe, and the long end trades at Eurex. CME can offer margining and reduced trading costs, along with one stop shopping. Will they be successful? I doubt it because it’s extraordinarily difficult to move contracts off exchanges once established.

The metals are another opportunity. The LME isn’t a retail focused exchange. CME could develop that in Europe. What are the odds? I’d say they are longer rather than shorter.

There has to be pressure on CME to monetize their Dow acquisition. The EU exchange might allow for that. They could create all kinds of equity contracts that might find different market segments. The Europeans regulate differently than the SEC, so CME might be able to exploit that.

However, no one has really innovated any contract of any size in the last ten years so I wouldn’t buy the stock thinking that anything will change in the future.

Long term, I don’t see it as a huge risk for the CME to build a European venue. Someday, they will build an Asian venue as well. Maybe sooner if you think about a place like Singapore. This doesn’t hurt the stock, and might actually help it. Certainly, they need the help. 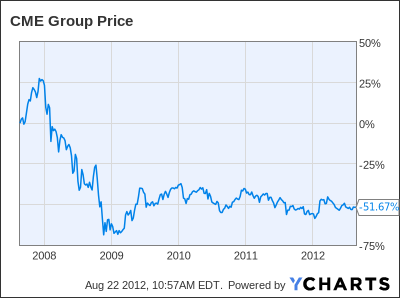