Did The Tech Bubble Burst Again?

Facebook($FB) reports and slumps after hours. Earlier this week, Zynga($ZNGA) got whacked. Groupon($GRPN) has been getting beat up since it went public. LinkedIn ($LNKD) is slightly above where it opened. Yelp ($YELP), lower.

All these are companies that were created post Sarbox and went public over the last year or so. Since March, they have gotten smacked and I don’t think Europe has that much to do with it. 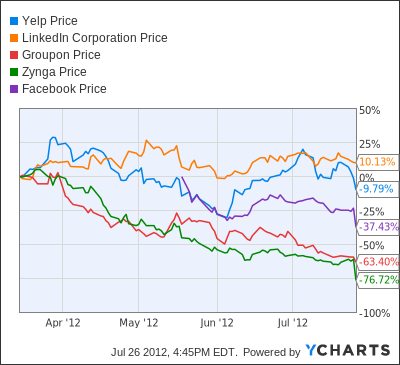 If these companies didn’t have the onerous Sarbox law staring them in the face, they would have come out much sooner than they did, and at much lower market caps.

Going public is a double edged sword. When you are a smaller public company, the expectations placed on your business are less than a company that has billions in market cap. The other problem all these companies have is that they are consumer products type companies where everyone on the street thinks they understand their business. Just because the target market is the same, every human being on the planet, doesn’t mean the business model or reason for existing is the same.

If these companies had gone public before they reached the billion dollar mark, how the public markets would have responded would have been much different. Instead, questions are being asked. Typical one, “How long before Zynga or Groupon trade on the pink sheets?”.

Going public is a painstaking process these days. The way the US regulates it hurts companies, and hurts our population.

Because of IRS rules, not every Tom, Dick or Harry gets a shot at investing in a Facebook. You have to fall into a special category. Additionally, this smaller pool of capital puts different pressures on the start up market. Because there is a smaller pool of capital, companies compete for it, and vice versa. When there is a hot company, capital chases it like Pamplona bulls and values of start ups get over priced. If there was a larger pool of capital, and less stringent requirements, pressure would get released.

Crowdfunding isn’t going to ease the pressure either. And frankly, the new patent law passed last year is only going to put more pressure on start ups, not less.

From the investor perspective, Sarbox is hurting, not helping. First, because of the delay in going public, the average American cannot use smaller companies to try and build wealth. Second, it adds risk to investing in start ups from the seed stage level because there isn’t a path to exit. The only path to exit is acquisition by another company. That can get tricky and costly with lawyers and bankers valuing companies. If a company is publicly listed, it’s easier to figure out the value and buy it.

As new industries are formed, only special classes of investors get to invest. It’s years before they hit the marketplace. Social media was that way. But so was biotech, nanotech and other less frivolous things that going public might add some real value too. What we are seeing is that because of the delay, companies are fully valued upon IPO. If investors wait and hang onto shares, they get burned. Employees that are stuck because of lock up provisions get burned. Wealth is destroyed, not created.

Because of the stringent exit requirements and all the costs associated with exiting, it forces investors to think about monetizing earlier than they might want to. If you have a winning investment and someone offers you something decent for it, you might consider getting out when pre-Sarbox you wouldn’t have.

Someday soon, we need to have a very frank discussion about the role of markets in our society. It’s too easy to point fingers and say the bankers are bad. In fact, most bankers aren’t bad and it’s messed up government regulation and incentives that are the root of behavior.

It’s clear though that our markets are broken, and so is our process of regulating how a company gets the capital so it can grow into them.