Grain Prices Could Be The Nail in the Economic Coffin

The economy is definitely sputtering. Clearly, all the stimulus, cheap money and extraordinary market manipulation by the Federal Reserve and US Treasury haven’t worked. Heck, they even let banks lie about the rates they were exchanging money at and that didn’t work! With all the money that we have printed and spent, it’s amazing we are still in trouble.

But there is a new storm brewing. It’s in the grain market. If you haven’t been paying attention, corn prices($CORN), soybean prices($ZS_F) and wheat prices($ZW_F) have gone through the roof this summer. The existing supply of stored grain is at it’s lowest level since 1998. There isn’t enough supply to meet demand. 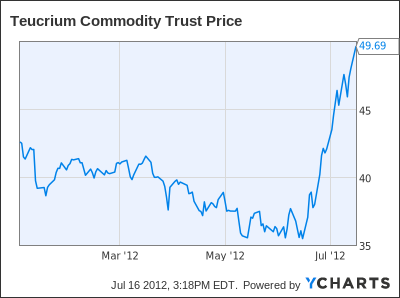 The price of grain is important. Grain is an economic building block. Grain prices underpin quite a few different products in the economy. Grain is manufactured into sugars, additives, chemicals and drugs. It is feed for animals. Livestock manufacturer’s initially will pay a lower price as farmers cull their herds-but then look out when demand remains the same and supply is limited. In 2013, prices for protein could skyrocket. Not only that, but the fact that processors aren’t using “pink slime” anymore causes the demand to go up.

Energy prices can be affected too. 40% of the corn crop goes to create the ethanol mandated by the government. That causes oil and corn prices to correlate. Upward pressure on corn will help to push oil ($CL_F) higher too.

Recall the Arab Spring? Much of it was blamed on the high cost of wheat. What is going to happen in parts of the world when they can’t get food because there isn’t any, or when they have to pay significantly more for it?

So far, the Federal Reserve has been extremely lucky. They have held interest rates at 0%. They have monkeyed with the market mechanism of the economy via quantitative ease, and operation twist. It recently has come out that regulators knew about the LIBOR deception back in 2008. But they can’t control the price of food.

Worldwide demand has already put a floor into the price of foodstuffs. Wait until there isn’t enough food to go around.